Clinton, Sanders Engage in Fierce Debate Ahead of N.H. Primary | Off Message

Clinton, Sanders Engage in Fierce Debate Ahead of N.H. Primary 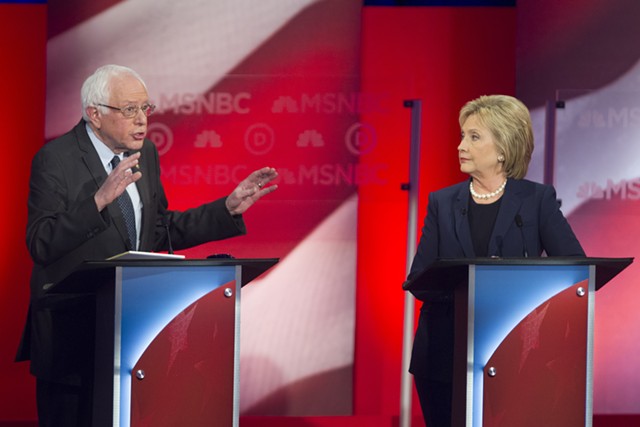 Now that was a debate.

In their first head-to-head exchange of the Democratic presidential primary, Sen. Bernie Sanders (I-Vt.) and former secretary of state Hillary Clinton escalated their argument Thursday over what it means to be a progressive — and whether ideological purity or tangible results matter more.

The fierce tone of the debate, which was hosted by MSNBC on the University of New Hampshire’s Durham campus, reflected the increasingly competitive nature of the race just five days before the first-in-the-nation Democratic primary. Coming three days after former Maryland governor Martin O’Malley dropped out, it was a far more focused affair.

Clinton, who trails Sanders by 20 to 30 percentage points in New Hampshire, wasted little time before questioning the feasibility of the Vermonter's agenda.

"I'm not making promises that I cannot keep," she said in her opening remarks, adding shortly thereafter, "The numbers just don't add up from what Sen. Sanders has been proposing. That's why all of the independent experts, all of the editorial boards that have vetted both of us have concluded that it is just not possible."

Sanders disputed the point, arguing that transformative change was possible — but only if politicians "stand up to the big-money interests and the campaign contributors." He later made clear that he didn't think Clinton was capable of doing so because, he said, she was part of "the establishment."

"What being part of the establishment is, is in the last quarter, having a super PAC that raised $15 million from Wall Street, that throughout one's life raised a whole lot of money from the drug companies and other special interests," Sanders said. "To my mind, if we do not get a handle on money in politics and the degree to which big money controls the political process in this country, nobody is going to bring about the changes that is needed in this country for the middle class and working families."

Clinton took exception to the allegation that, as she put it, "anybody who ever took donations or speaking fees from any interest group has to be bought."

"I just absolutely reject that, senator. And I really don't think these kinds of attacks by insinuation are worthy of you," she said. "Enough is enough! If you've got something to say, say it directly. But you will not find that I ever changed a view or a vote because of any donation that I ever received."

It was time, she said, "to end the very artful smear that you and your campaign have been carrying out in recent weeks and let's talk about the issues."

Sanders wasn't about to let it go.

"Let's talk about issues, all right? Let's talk about why, in the 1990s, Wall Street got deregulated," he said. "Did it have anything to do with the fact that Wall Street provided — spent billions of dollars on lobbying and campaign contributions? Well, some people might think, ‘Yeah, that had some influence.’”

When debate moderator Rachel Maddow pressed Clinton on whether she had been "too dismissive of voters' concerns" about the hundreds of thousands of dollars’ worth of speaking fees she received from Goldman Sachs, Clinton conceded that she "may not have done the job I should in explaining my record." But when asked by moderator Chuck Todd whether she would release transcripts of those speeches, she hedged.

"I will look into it," she said. "I don't know the status, but I will certainly look into it."

Since early Wednesday, Sanders and Clinton — and their aides and supporters — have been sniping at one another over whether the former secretary of state could be considered a progressive. Clinton was eager to defend herself on that count Thursday night.

“I am a progressive who gets things done. And the root of that word, progressive, is progress,” she said, adding that Sanders’ definition of the term might disqualify such liberals as President Barack Obama, Vice President Joe Biden, Sen. Jeanne Shaheen (D-N.H.) and the late senator Paul Wellstone from being described as such.

Though the two candidates have been focusing their attention on New Hampshire lately, Maddow queried Sanders about some Vermont history. In a question about his newfound affiliation with the Democratic Party, the MSNBC host said that he had “arguably cost the Democrats a congressional seat” in 1988 by splitting the left-leaning vote and enabling a Republican to win.

The candidates kept their focus on Vermont for another moment after Sanders mentioned former governor Howard Dean’s celebrated 50-state strategy — a commitment to contest even the reddest of states — when he served as chairman of the Democratic National Committee.

“I'm very proud and grateful to have the support of so many elected Vermonters and former officials: two former governors, the current governor, the current other senator,” Clinton said, referring to former governors Dean and Madeleine Kunin, Gov. Peter Shumlin and Sen. Patrick Leahy (D-Vt.). “I really appreciate that. And I think it's because they've worked with me, they've seen what I do. They know what kind of a colleague I am. They want me as their partner in the White House.”

As he has in the past, Sanders struggled Thursday when the debate turned to foreign policy. Asked to respond to Clinton’s plan to defeat the Islamic State of Iraq and Syria, Sanders answered, as he often does, by noting his opposition to the Iraq War, which she supported.

“If I could respectfully add,” Clinton interjected, “A vote in 2002 is not a plan to defeat ISIS. We have to look at the threats that we face now, and we have to be prepared to take them on and defeat them.”

When Todd asked how long a President Sanders would keep American troops in Afghanistan, the candidate twice dodged the question by segueing back to Iraq. He declined again to name who advised him on foreign policy. And when asked to rank North Korea, Iran and Russia in terms of their threat to national security, he answered as if reading from a queue card.

“Clearly North Korea is a very strange situation because it is such an isolated country run by a handful of dictators, or maybe just one, who seems to be somewhat paranoid. And, who had nuclear weapons,” Sanders said. “And, our goal there, in my view, is to work and lean strongly on China to put as much pressure. China is one of the few major countries in the world that has significant support for North Korea, and I think we got to do everything we can to put pressure on China. I worry very much about an isolated, paranoid country with atomic bombs.”

Reprising an argument she made in the 2008 election, Clinton characterized herself as the candidate best prepared to lead the nation’s military — and her opponent as uninformed and naïve.

“I do think questions have been raised and questions have to be answered because when New Hampshire voters go on Tuesday to cast your vote, you are voting both for a president and a commander in chief,” she said. “And there is no way to predict what comes in the door of that White House from day to day that can pose a threat to the United States or one of our friends and allies, and I think this is a big part of the job interview that we are all conducting with the voters here.”

After nearly two hours of hostile exchanges, Clinton and Sanders appeared to make up near the end of the debate when Todd asked each whether he or she would choose the other to serve as their vice president.

“Well, I'm certainly going to unite the party, but I'm not — I'm not getting ahead of myself,” Clinton said. “I think that would be a little bit presumptuous. If I'm so fortunate as to be the nominee, the first person I will call to talk to about where we go and how we get it done will be Sen. Sanders.”

Her opponent appeared eager to sound even more gracious.

“I agree with what the secretary said. We shouldn't be getting ahead of ourselves,” Sanders said. “And as I have said many times, you know, sometimes in these campaigns, things get a little bit out of hand. I happen to respect the secretary very much. I hope it's mutual. And on our worst days, I think it is fair to say we are 100 times better than any Republican candidate.”