Sanders Raps Clinton for Apologizing ‘When the Tide Has Changed’ 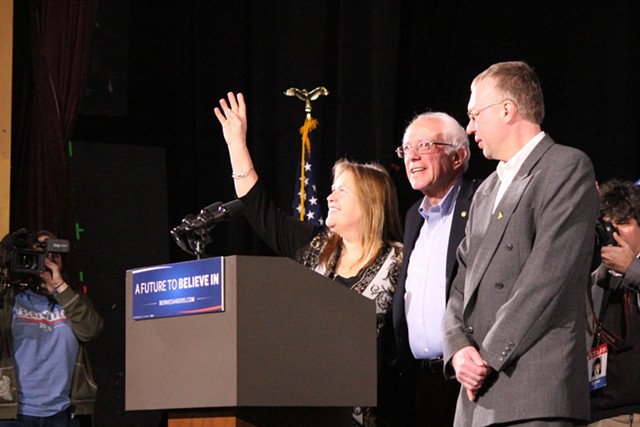 Hours ahead of his first one-on-one debate with former secretary of state Hillary Clinton, Sen. Bernie Sanders (I-Vt.) on Thursday debuted a tough new hit on his Democratic presidential rival.

Speaking at a rally in Rochester, N.H., Sanders spent nearly 10 minutes listing moments in his career when he stood up to majorities in Congress. In many of those instances — including his votes against the North American Free Trade Agreement, the Defense of Marriage Act, repeal of the Glass-Steagall Act and the Iraq War — either Clinton or her husband, former President Bill Clinton, had taken the opposite position.

“Sometimes it is easier to apologize for a bad vote 15 or 20 years later when the tide has changed,” Sanders told an audience of roughly 400 at the Rochester Opera House. “It is a lot harder to stand up, even though you are outnumbered, and cast the right vote. And that is what leadership is about: not having to apologize, standing up and fighting for what is right.”

The Vermont senator did not mention his rival by name, but his target was clear: the former secretary of state has apologized for her vote in favor of the Iraq War, distanced herself from DOMA and modulated her positions on trade and Wall Street regulation.

Sanders’ Rochester appearance came just before he was scheduled to debate Clinton for the first time since former Maryland governor Martin O’Malley dropped out of the Democratic primary Monday. That night, Clinton narrowly edged Sanders out in the Iowa caucuses. But in his remarks Thursday evening, he did not sound like he’d accepted that result.

Indeed, as Sanders spoke in Rochester, CNN and WMUR-TV released a new poll indicating that his sizable lead in New Hampshire was holding steady. The poll, one of the first conducted entirely after the Iowa caucuses, showed him leading Clinton 61 to 30 percent among likely Democratic voters in the Granite State.

Two weeks ago, the same polling outfit, the University of New Hampshire Survey Center, had Sanders leading Clinton 57 to 34 percent. The new poll’s margin of error was plus or minus 6.5 percentage points.

Perhaps in an acknowledgement of her fading chances in New Hampshire, the Clinton campaign revealed Thursday night that the candidate would be traveling to Flint, Mich., on Sunday — a mere two days before New Hampshire voters go to the polls.