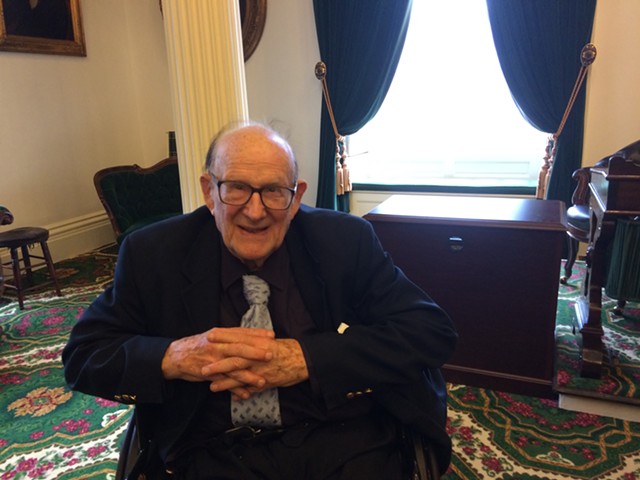 Sen. Bill Doyle (R-Washington) created drama in the Senate Thursday when he requested reconsideration of the paid sick leave bill and a defeated amendment that would exempt businesses with five or fewer workers from having to provide the benefit.

“It was surprising and disappointing,” Senate President Pro Tempore John Campbell (D-Windsor) said of Doyle’s request. “He certainly let down a lot of employees.”

The House passed a paid sick leave bill last year by a vote of 72-63 and Gov. Peter Shumlin has already signaled his support. Wednesday the Senate embraced the bill as well, voting 21-8 to pass its tweaked version of legislation requiring all employers to offer paid time off for sickness or to care for family members who are ill. The next step was expected to be quick negotiations with the House over minor differences before sending the measure to the governor to be signed into law.

Now it appears the Senate version could exempt tiny businesses. That’s because the exemption amendment on which Doyle wants another vote had failed to win inclusion in the bill — by a single vote. Doyle, one of the 15 who originally voted against the amendment, wants to switch sides.

Seated in his wheelchair in the Senate chamber, otherwise empty because most senators had gone downstairs to caucus about his reconsideration request, Doyle said he had second thoughts about how the bill would affect small businesses. “The people overlooked in society are small-business people,” he said.

Despite frustration over Doyle’s action, Campbell urged senators attending the impromptu caucus to agree to the reconsideration, because it is every senator’s right to make such a request. But he also proposed postponing a second vote on the exemption amendment until Wednesday, so he could vote. He had to preside in the Senate Thursday because Lt. Gov. Phil Scott was acting governor while Gov. Peter Shumlin campaigned for Hillary Clinton in New Hampshire. Scott can’t preside when he is acting governor.

The Senate later agreed to the delay.

Campbell chose Wednesday for the revote to be sure all senators would be present, he said. The extra days also give him and his leadership team time to try to persuade some of the seven Democrats who previously supported the five-worker exemption to switch sides to counter Doyle’s reversal. “This is a Democratic issue,” Campbell said. “We are fighting for employee rights here.”

Sen. Dick Mazza (D-Grand Isle) voted for the exemption. Would he change his mind? “That is not going to happen,” said the owner of a small grocery store.

Sen. Brian Campion (D-Bennington) proposed the exemption and remains convinced that tiny business can’t afford to offer paid sick time. Although the Senate approved an amendment from Sen. Diane Snelling (R-Chittenden) that gave businesses with five or fewer workers an extra year to comply with the mandate, Campion said, “That wasn’t enough.”

Campion didn’t know how many workers would be affected by the exemption. “It would exempt a lot of workers,” according to Annie Accettella, campaign director for the Paid Sick Days Coalition. Most of the employees without paid sick time work in small businesses, she said.

Jim Harrison, president of the Vermont Retail & Grocers Association, welcomed reconsideration of the small-business exemption. “We think it is a very reasonable request,” he said.

Sen. Kevin Mullin (R-Rutland) led the fight for the bill as chairman of the Senate Economic Development Committee. He was surprisingly upbeat Thursday afternoon, calling reconsideration a “hiccup.”

“I’m not in fear of losing this bill,” he said.

He added, “I don’t think the exemption is that big a deal.” Noting that Oregon exempts businesses with up to nine workers, Massachusetts with 10 and Connecticut with 49, he said, “Vermont would still be a leader.”