Bill Would Crack Down on Threats, Especially Against DCF Workers | Off Message

Bill Would Crack Down on Threats, Especially Against DCF Workers

The committee is working on a bill that would create an enhanced penalty when people in the family services division of DCF are assaulted, and would also establish a new offense — criminal threatening.

“I personally have been threatened to be killed,” said Patricia Casanova, who has worked at DCF for a dozen years. And she said she had found people waiting at her car for her.

Casanova and two other state workers urged the committee to expand the proposed enhanced penalty to cover all state workers. Margaret Crowley, chair of the Vermont State Employees' Association’s legislative committee, said people under stress because of government actions often lash out at the first state worker they run into.

Crowley recounted how a man threatened her when she handed him paperwork concerning his court case. He called her “a cog in the machine” that had wronged him.

Sen. Dick Sears (D-Bennington) said he proposed the new offense, criminal threatening, before social worker Lara Sobel was gunned down last August in the parking lot outside a state office building in Barre. A DCF client has been charged with her murder. Sears said he was responding to concerns raised by Erica Marthage, Bennington County's state’s attorney.

Marthage testified by phone about the challenges she has faced when trying to prosecute people who make threats against law enforcement and courts, and when people use social media to tell friends they might bring a gun to school and shoot people. “The statutes as they are now make it extremely difficult to prosecute those cases,” she said. 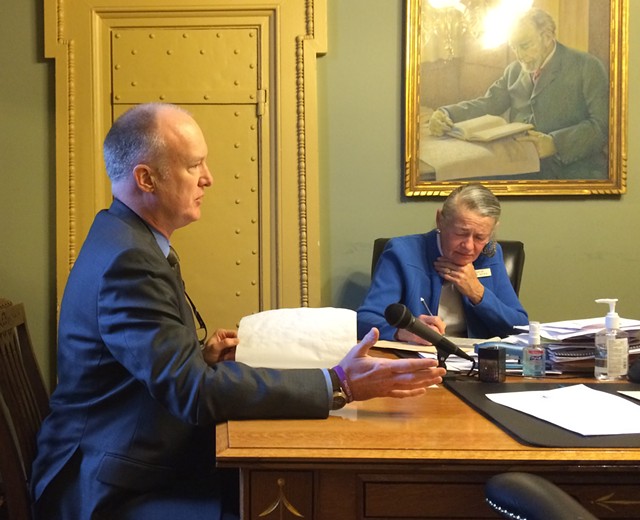 Washington County State’s Attorney Scott Williams addressed the committee as well. Williams had cradled the dying social worker, Sobel, after she was gunned down.

Williams offered a caution about the proposed criminal-threatening offense. “I just worry how it gets applied,” he said. He told of an instance last week in which a father spoke loudly about going home and getting a rifle in a court waiting room after his son had been adjudicated a juvenile delinquent. “My deputy, it freaked her out,” Williams said.

Williams said he knew the man and spoke to him. “In his mind, he was venting,” rather than making a threat he would carry out, Williams said. Did this ill-advised comment really put people “in reasonable fear of death or serious bodily harm?” he asked.

The law already has enhanced penalties for assaults on law enforcement officers, firefighters and health care workers. “Putting DCF workers in that category is a right and good thing to do,” Williams said.

Matthew Valerio, the state defender general, argued against the bill. “As usual, I’m here with a bucket of ice water to say, 'Calm down,'” Valerio told the Senate committee.

“The enhanced penalty really does nothing to deter conduct,” Valerio said. “At best, what it is really doing is making a political statement.” He worried that it would be applied to juveniles at Woodside Juvenile Rehabilitation Center, a state facility for young people with criminal and mental health histories.

He also argued against creating a new crime, saying existing statutes could be used for criminal threats.

John Treadwell, an assistant attorney general, agreed that prosecutors might be able to use other statutes in cases of threatening, but added that crafting a specific statute sends a message.

Sears, chair of the Judiciary Committee, said he expects to make any revisions to the bill next week and then call a vote.