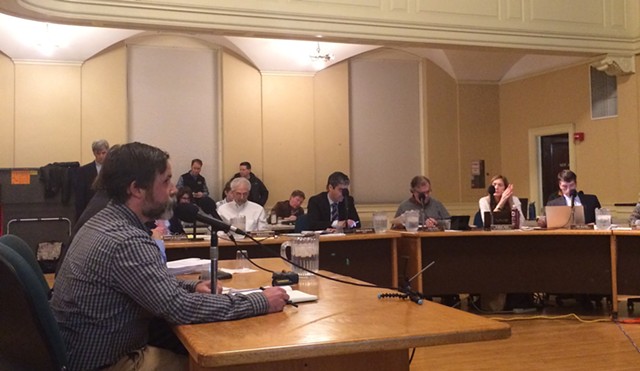 Two years ago, Burlington Mayor Miro Weinberger and local developer Erik Hoekstra wore matching green hard hats and smiled for TV cameras as construction began on a new apartment building in the Old North End. Both men touted the project as a sign of economic rebound in a neighborhood that needed it.

Last week, the mood was notably less celebratory as Hoekstra sat before the mayor and the city council and delivered an ultimatum: His company will stop building in Burlington if the tax bill on that Old North End apartment building isn't reduced.

Hoekstra, a partner at the well-known real estate company, Redstone, was taken aback when the city assessor calculated the property value on the 22-unit property, which also hosts the restaurant, Butch + Babe’s, at $3 million — roughly $1 million more than what he had expected.

When he challenged the assessment, the Board of Tax Appeals, made up of residents appointed by the council, lowered the figure to $2.7 million but upheld most of the city assessor's calculations. Instead of taking the typical next step of appealing to court or the state appraiser, Hoekstra has opted to first try an arcane — and higher profile — alternative: asking the city council, which doubles as the board of civil authority, to hear his case.

At the January 25 city council meeting, after a brief back-and-forth between lawyers, Hoekstra suggested this was much more than a mere quibble over taxes.

“If this assessment sticks, we’re done,” he told the council — meaning Redstone will stop developing in Burlington.

In the last two years, the company has built three apartment buildings in the Old North End and one downtown, on Pearl Street. According to Hoekstra, those projects were barely feasible financially, and unexpectedly high property tax assessments would make future endeavors untenable.

What’s more, Hoekstra predicted that other housing developers would follow suit. “You don’t have to care about me. You don’t have to care about Redstone. But you just spent months and months developing a Housing Action Plan to try to reduce the significant housing problem that we have,” Hoekstra went on. “If this assessment sticks, you might as well throw out the Housing Action Plan and forget about anybody developing any new market-rate housing in the city of Burlington going forward.”

To take up Hoekstra's case, the council has to determine that the Board of Tax Appeals’ decision was “clearly erroneous.” It will meet on February 8, behind closed doors, to make the judgment.

This isn’t the only significant challenge the city is facing on property tax assessments — a group of landlords, Redstone among them, have banded together and sued the city, alleging that the assessor illegally raised taxes on their rental properties in one part of the city.