University of Iowa Students Spend a Vampire Weekend at Bernie's

For a moment, Ezra Koenig looked a little star-struck.

“We don’t see people like this all the time,” the Vampire Weekend frontman said as he introduced the headliner of a Saturday night concert in Iowa City.

The clean-cut rock star had just busted out a version of “Unbelievers,” prefaced by a sheepish acknowledgment of the irony of the song selection. He pointed to large, blue banner hanging to his right, behind another, bigger stage. “A future to believe in,” it read.

“So I want to say that, maybe when the song was written it came from a place of frustration or nihilism about the world,” Koenig explained. “But we’re so excited to be here, because we feel the same way that you do about Bernie: He’s a man we believe in.”

After imploring his audience of 3,800 to check out the next act on YouTube — “it’s not boring; it’s amazing” — Koenig asked them to “make some noise for Sen. Bernie Sanders!”

The crowd complied. Throughout the University of Iowa athletic complex, students roared with approval — fists raised and cellphones held high.

“Whoa,” Sanders said when he reached the podium. “There’s a lot of people here.”

Then he got down to business.

“The only way that we can bring real change to this country is when millions of people — young people, working people, black people, white people, Latino people,” Sanders shouted, his voice drowned out by the roar.

“Gay people, straight people, women, men,” he continued. “When all of us stand together and very loudly and clearly say, ‘Enough is enough!’”

For 25 minutes, Sanders performed his greatest hits, segueing with ease from economics to campaign finance reform and — playing to the crowd, perhaps — dwelling on social issues, such as abortion rights, gay marriage and the legalization of marijuana.

“Now I know that none of you know anything about marijuana,” he said, drawing laughter and applause. “It turns out that the black community and white community do marijuana at about equal rates, but blacks—“ 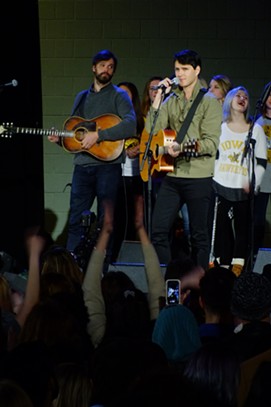 “That wasn’t exactly what I meant,” Sanders said with a grin.

Then he got real.

“Now I know that you are an intelligent group of people and, very seriously, I know and I hope very much that you all understand what a killer drug heroin is,” Sanders said, doing his best stern grandpa. “There are two ways out when you do heroin: No. 1, you’re gonna get arrested and go to jail. No. 2, you’re gonna die.”

Message? “Stay away from heroin,” he advised.

Sanders had another pressing message: In two days' time, Iowans would take part in the nation’s first presidential nominating contest. The pundits, he said, believe that young people “only come out for rallies” and are “not gonna come out to participate in the caucuses.”

“So how would you like to make the pundits look dumb on election night?” Sanders shouted.

He will need every vote he can get. Hours before Sanders took the stage in Iowa City, the state’s preeminent pollster, Ann Selzer, released her final, pre-caucus poll for the Des Moines Register and Bloomberg Politics. The race, she found, was too close to call.

Among likely Democratic caucus-goers, former secretary of state Hillary Clinton led Sanders 45 to 42 percent — a spread just inside the poll’s 4-percentage-point margin of error. Supporters of the two leading candidates were equally excited about their candidates, Selzer found, and the two scored similar favorability ratings.

Which explains why Sanders spent his final Saturday night before the caucuses on the biggest college campus in the state.

After the candidate concluded his remarks, Koenig struck up a version of “This Land is Your Land,” a song Sanders made famous again with his spoken-word rendition of the Woody Guthrie classic. Koenig was accompanied by the night’s other musical guests: Foster the People, the Dirty Projector’s David Longstreth and a university a cappella group.

As they launched into the second verse, Sanders and his wife, Jane, reemerged onstage behind the musicians. The senator stood in back, his hands crossed in front of him, and bobbed. Every now and then, he clapped — though not exactly with the beat.

Jane Sanders gestured for him to move toward the front of the stage, and the candidate took up a position between Koenig and Longstreth. Behind him, the activist Cornel West and the Chicago politician Jesus “Chuy” Garcia filtered onto the stage.

As the band strummed its final chord, Sanders clapped enthusiastically and dispensed half-hugs to the musicians.

“Make some noise for Bernie!” Koenig yelled. “Go out and vote!”