Sanders Rallies the Faithful in Iowa's Quad Cities | Off Message 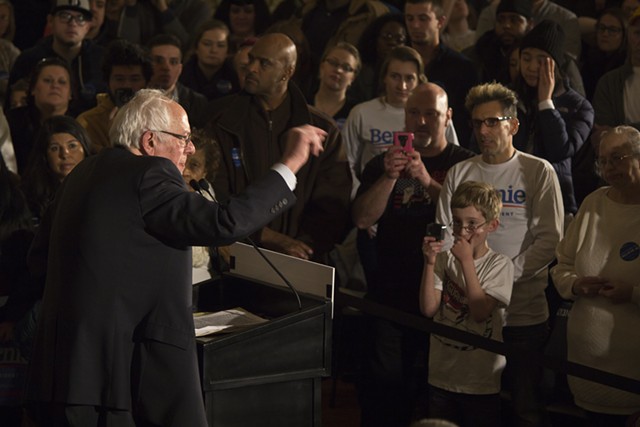 Sixteen months ago, Sen. Bernie Sanders (I-Vt.) pulled into Dubuque, Iowa, in a rented Toyota Camry, accompanied by two aides and his wife, Jane. Inside the student center at Clarke University, some 150 people and a handful of reporters had gathered to listen to the little-known senator, who was considering a long-shot bid for the presidency.

Sanders quickly turned his attention to a favorite subject: the role of wealthy campaign donors in the American political system.

"I do not believe people fought and died for democracy so that billionaires could buy elections!" he shouted.

On Friday night, Sanders returned to Dubuque. This time, he arrived in a bus bearing his logo, trailed by another one filled with reporters. And this time, his audience in a cavernous hall at the Grand River Event Center numbered closer to 1,300.

But some things — such as Sanders' age-old message — never change.

"Democracy is not a spectator sport. Professional football is a spectator sport," he told his rapt audience Friday night. "Democracy is a system that people fought and died for — to make sure that ordinary people could control the destiny of their country and not just kings and queens and billionaires."

As Sanders sprinted through the vote-rich Quad Cities just three days before the Iowa caucuses, his pleas for support sounded more urgent than ever.

"Let me give you the straight political reality here," he said earlier Friday evening in Davenport. "On Monday night, if there is a large voter turnout — if thousands of people who previously did not vote, did not get involved in the caucus — if those people come out, we win. If there is a low voter turnout, we lose. That's a fact."

He encouraged the 1,000 people gathered at the Danceland Ballroom to take desperate measures to turn out fellow supporters.

"Bring out your friends and relatives. Do some short-term kidnapping of people," he joked. "Short-term. Bring 'em right back after the caucus."

Sanders and his chief Democratic rival, Hillary Clinton, spent the latter half of the day crossing each other's tracks. Earlier Friday, Clinton spoke in Dubuque. And as Sanders concluded his remarks in Davenport, Clinton was preparing to speak just blocks away.

Their rhetoric, however, was miles apart.

"People with health emergencies can’t wait for us to have some theoretical debate about some better idea that will never, ever come to pass," she said Friday morning in Des Moines.

"I'd rather under-promise and over-deliver than the opposite," she said later in Davenport.

Across town, Sanders scoffed at those who say, "It's just too hard. It can't be done. We have to think much, much smaller." His voice rising, Sanders shouted, "I say: To hell with that!"

Clinton and Sanders also tangled over how they fund their campaigns. Ahead of a Sunday deadline to report fundraising figures, three super PACs supporting Clinton's campaign disclosed that they had collectively raised more than $56 million last year.

Sanders' campaign, which has shunned the use of super PACs, responded to the news with a snark-laden press release. "Bernie Sanders raised no money last year for a super PAC, his campaign announced on Friday," it began. "He won't raise any money for a super PAC this year either, a spokesman added." 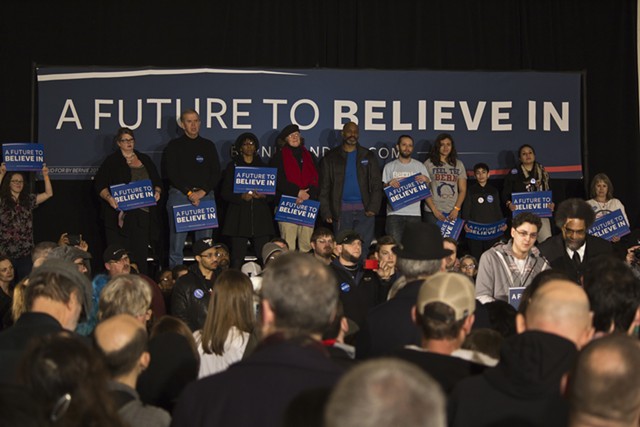 In Dubuque, Sanders focused on the nearly 3 million contributions his campaign had collected from more than 1 million people, and he criticized those who took money from the financial services and pharmaceutical industries.

Though recent polls show Sanders and Clinton neck-and-neck in Iowa, the senator argued Friday that his campaign was in a stronger position.

"I believe that any objective analysis of the campaigns that are now competing — between Secretary Clinton and us — will tell you that the energy, momentum is with our campaign. We are the campaign," he said. "I cannot tell you how many people I've spoken to in Iowa who say, 'You know what, I used to be in politics. I gave up. You got me back in.'"

Tim Stevenson, a 39-year-old Davenport resident, is just that sort of person. The silver-haired software developer said Sanders' "record of public service" and "integrity" had inspired him to volunteer as a precinct captain at Monday's caucuses. A recent transplant from Illinois, Stevenson has never before taken part in the process.