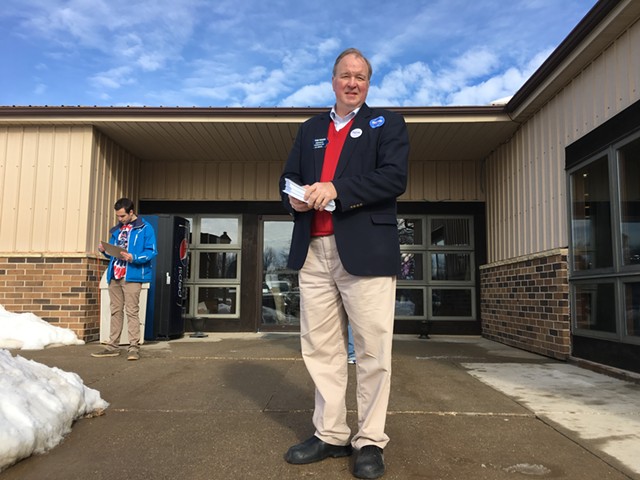 To hear Hillary Clinton's supporters tell it, nominating Sen. Bernie Sanders (I-Vt.) would doom the Democratic Party to a long sentence in a Siberian gulag.

Republicans, Sen. Claire McCaskill (D-Mo.) told the New York Times this month, "can’t wait to run an ad with a hammer and sickle."

“He’s entitled to his positions, and it’s a big-tent party, but as far as having him at the top of the ticket, it would be a meltdown all the way down the ballot," added Missouri Gov. Jay Nixon.

"Just the opposite of what the corporate Democrats, the old-guard Democrats are saying," the former Iowa state senator said. "Rather than dragging the ticket down, he's the only way the Democratic Party is gonna survive."

Now a candidate for the U.S. Senate, Fiegen stood sentry outside a Sanders rally Saturday morning in the eastern Iowa town of Manchester, proudly sporting a Sanders sticker and handing out his own campaign literature. Fiegen endorsed Sanders at the Iowa Democratic Party's Jefferson-Jackson Dinner last October and, these days, he sounds an awful lot like the candidate he supports.

Asked to deliver his campaign pitch, Fiegen began thusly: "First of all, I agree with Bernie. The first thing we have to do is change campaign finance. The second thing is, we've gotta break up the big banks."

Last month, Fiegen visited the last of Iowa's 99 counties. In his travels, he said, he noticed a palpable excitement for the senator from Vermont.

"I have been to so many [Sanders] events where there are 20 times the people I see at normal Democratic events," he explained. "A typical county meeting here is 20, 25, 30 people. I've gone back to those same counties where Bernie has held a town hall: 400, 500, 600 people in that same town."

To be sure, Fiegen isn't exactly a leading Democrat. He ran for the same seat six years ago and lost. And even if he defeats his two rivals for the Democratic nomination, he'd be up against Sen. Chuck Grassley (R-Iowa), who has represented the state in Congress since 1975.

Still, Fiegen has one thing going for him: He's in touch with the Democratic base.