Burlington Says Gun Control Is Not Outlandish | Off Message 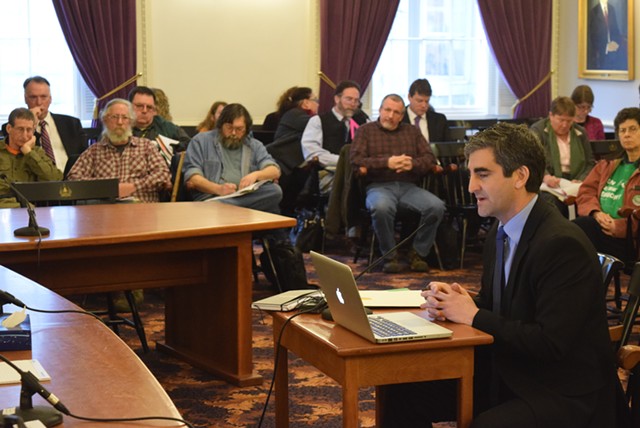 Two years after Burlington residents voted for three gun-control measures — and a year after state lawmakers dismissed the charter changes as unconstitutional — Mayor Miro Weinberger tried to make the case to legislators that there’s nothing outlandish about what the city wants to do. He argued that the three gun-control measures the voters approved are legal, doable and accepted elsewhere.

“I think we made a stronger case this year,” Weinberger said after speaking at the Statehouse. “I sense it’s being treated differently.”

Earlier, Weinberger told the House Government Operations Committee, as about a dozen gun-rights activists waited to counter his arguments: "Gun safety is not an area where Burlington is trying to chart some new path. Today, we are trying to catch up with laws in Texas, Montana, and Alaska."

Along with banning guns in bars, city voters in 2014 approved measures to require city residents to lock up guns in their homes and to allow police to seize guns in cases of domestic violence. Burlington voters’ wishes are irrelevant, however, unless the legislature approves the changes to the city’s charter.

Weinberger sought to counter arguments made last year that the proposed charter changes violate the U.S. Constitution's Second Amendment right to bear arms and a state law that prohibits municipalities from restricting guns. The U.S. Supreme Court has upheld some restrictions on all constitutional rights, Weinberger said. And lawmakers routinely make new state laws that alter old state laws, he noted. Despite the renewed arguments, persuading lawmakers to allow the city to restrict guns remains no easy task.

“Who’s going to pay for the lawsuit?” committee chair Donna Sweaney (D-Windsor) said, after a morning full of testimony. Many believe a court challenge is inevitable if the changes are approved. If the legislature endorses those changes, Sweaney wonders whether the state would have to pay to defend the laws.

She said she has also other concerns and expects her committee to continue discussing the issue next week, before deciding what to do.

Rep. Ron Hubert (R-Milton), a committee member, was more openly hostile to the changes. As legislative lawyer Erik Fitzpatrick explained the proposals, Hubert asked if the gun ban would apply to a person checking into a hotel that has a bar. Yes, Fitzpatrick said.

“So it’s not an anti-drinking bill, it’s an anti-gun bill,” Hubert declared.

After making his pitch the committee, Weinberger met privately with House Speaker Shap Smith (D-Morristown). Smith has been clear that he sees legal problems with the charter changes and a lack of interest among his members to push the issue.

For Weinberger, a Democrat whom many believe aspires to higher office, pursuing gun control in Vermont could be a political gamble. Smith, Gov. Peter Shumlin and Sen. Bernie Sanders (I-Vt.) are among those in a long line Vermont politicians who, loathe to rile gun-rights activists, have walked a careful line on gun control.

As he stood in the Statehouse hallway after testifying, Weinberger made it clear he has given that concern some thought, but he contended the tenor of opinion has changed. “I think there’s been a broad cultural shift in this country and to some degree in Vermont,” Weinberger said. “Am I doomed? I don’t see the numbers in that.”

Back in the committee hearing, gun-rights activists lined up to speak against the charter changes. A short time later, as Sweaney ate lunch, a phone message sat on top of a pile of papers from a woman urging her to defeat the Burlington charter changes.