State Police to Discuss Sorrell Allegations With the FBI | Off Message

State Police to Discuss Sorrell Allegations With the FBI 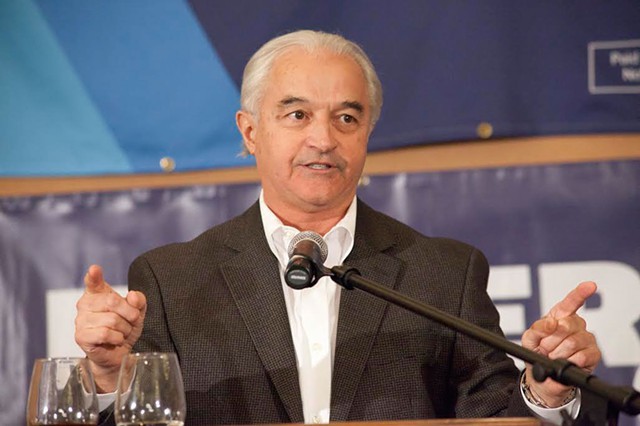 Vermont State Police officials plan to meet with Federal Bureau of Investigation agents Friday to determine whether to initiate a criminal investigation into allegations against Attorney General Bill Sorrell, according to a VSP spokesman.

The spokesman, Scott Waterman, confirmed that his agency had "received a complaint of alleged criminal misconduct" from a panel of state's attorneys charged with investigating six allegations against Sorrell. He said Friday's meeting had been scheduled "to determine if an investigation is warranted and who has jurisdiction to perform the investigation if one occurs."

As Seven Days reported in this week's Fair Game political column, Waterman told the newspaper Tuesday that his agency had already launched such an investigation. On Wednesday, he told Seven Days that he had been mistaken and that the state police had not yet done so. He attributed the error to internal miscommunication at the VSP.

"We are not investigating at this time," Waterman said Wednesday. "We are going to be consulting with the FBI over the next couple of days because there's a question of jurisdiction."

Waterman also confirmed Wednesday that the referral concerned an allegation that Sorrell took official action in exchange for campaign donations. That allegation was one of six included in a complaint filed last spring by Vermont Republican Party vice chair Brady Toensing and based on reporting by Seven Days and the New York Times.

A panel of 11 state's attorneys tasked with investigating Toensing's complaint released its final report Friday. It recommended that no action be taken against Sorrell with respect to several of the allegations, but it declined to weigh in on the pay-to-play charge. The report's authors wrote that "separate investigatory work is underway to deal with" that allegation, though they did not specify who was doing that work.

Toensing alleged that Sorrell pursued a lawsuit against the oil and gas industry at the behest of a Texas law firm that donated $10,000 to his 2014 reelection campaign. The state later hired the firm, Baron & Budd, to serve as outside counsel in the case. In a sworn affidavit Sorrell filed with the state's attorneys investigating him, he admitted to accepting an envelope with the checks immediately before the firm's lawyers made their ask. But he denied any wrongdoing.

"I am pleased this meeting is taking place. I look forward to closure," Sorrell said in a written statement Wednesday. "I have not done any of the things Toensing has alleged. I've been cleared on all of the alleged campaign finance violation allegations. I look forward to the same on the criminal law violation allegations. My attorneys and I will continue to cooperate fully with a further inquiry, if one is conducted."

As Seven Days reported in December, state officials have already met with the FBI about the allegations. According to three people involved in the matter, Vermont State Police troopers assisted the state's attorney's with their investigation. Waterman would neither confirm nor deny that Wednesday.