Income-Based Residential Property Tax System Proposed for All | Off Message 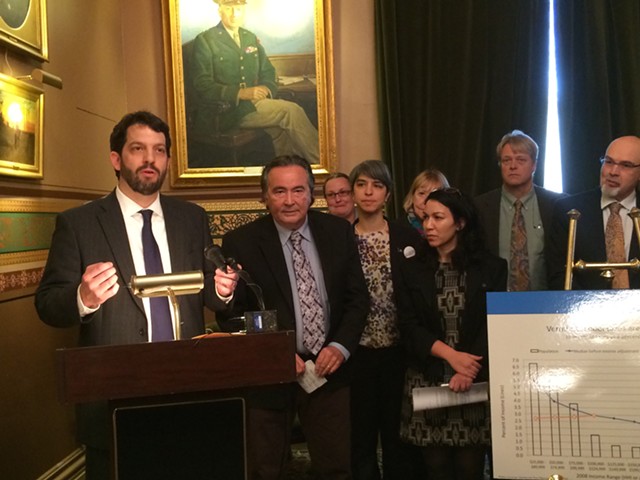 Thirty-five Democratic and Progressive lawmakers have proposed that Vermont's residential property owners pay education taxes based on their incomes — expanding a system in place for many state residents.

Rep. Chris Pearson (P-Burlington) said the bill would increase the fairness of the school tax by asking higher-income Vermonters to pay the same share of their pay as middle-income property owners. Vermonters with $100,000 in household income now pay about 3 percent of their wages in property taxes, compared to 0.5 percent for households with income of $1 million, he said.

“We believe we have a way to make our school funding more equitable and, at the same time, give most Vermonters a break on their property taxes,” said Sen. Anthony Pollina (D/P-Washington), sponsor of the Senate version of the bill.

Currently, the income-based system covers only taxpayers with household incomes of $90,000 or less and only for a house and two acres. Residential property owners with more than two acres pay an additional amount based on the property’s value.

Taxes on commercial and vacation properties would still be based on their value.

The new bills join more than two dozen other proposals to alter the property tax system for financing schools.

Rep. Janet Ancel (D-Calais), chair of the House Ways and Means Committee, which reviews tax bills, said the panel might consider the new proposal. She said she would want to see an analysis of who would pay more and who would pay less. “I don’t want to adopt a system that is less progressive than what we have now,” Ancel said.

Senate Finance chair Tim Ashe (D/P-Chittenden) said his committee already had a “walk-through” of Pollina’s version of the bill. He said it would be part of a broader discussion of property taxes that the Finance Committee will undertake this session.