After Raid, Police Commissioners Say DEA Is Overzealous | Off Message 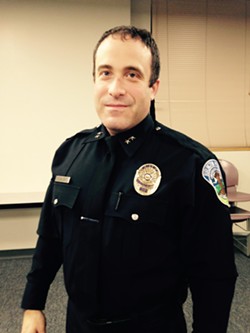 Note to law enforcement: Don't risk the lives of innocent people when you go after violent drug dealers.

That was the message that Burlington police commissioners sent Tuesday night at their first meeting since a Drug Enforcement Agency "no-knock" raid on Elmwood Avenue in December. The raid killed convicted drug dealer Kenneth Stevens, and stray rounds that officers fired entered a nearby apartment. No one else was harmed.

Little sympathy surfaced during the meeting for Stevens, the target of the raid, whose extensive criminal record included a 2012 conviction for selling heroin to a roommate who died of an overdose. He was also charged in 1996 with shooting his girlfriend's brother in the head.

"Hello DEA," O'Neill said after the meeting. "Get the message: You really need to do things differently around here."

Commissioners grilled Burlington Police Chief Brandon del Pozo for an hour about the December 22 raid. The BPD was involved as a backup to the DEA, which led the exercise.

According to law-enforcement agencies, Stevens raised a muzzleloader at police and shouted, "Who wants to die?" as the officers bashed through his door at 7 p.m. Two officers fired 13 shots, killing Stevens.

Del Pozo said DEA officials had the opportunity to nab Stevens outside his home earlier that day, but chose not to for several reasons. They knew he was making a drug buy and wanted to catch him afterward in possession of heroin to help ensure his conviction. They might have waited until dawn to do the raid, when Stevens was more likely to be asleep and less likely to be armed, but by that point he could have sold some of the drugs, reducing the potential charges against him.

"So that's why the warrant was executed that way," del Pozo said.

A half dozen Burlington police officers were involved in the raid but not in the lead. One officer was at the back of the line of police who bashed open the door to Stevens' apartment. Several others were guarding the perimeter and two were in a patrol car.

Still, commissioners questioned their involvement. "I find this very upsetting. The DEA runs the operation; the DEA can do it without us," O'Neill said.

Sarah Kenny, chair of the police commission, urged del Pozo to express the commission's dismay on Thursday when Vermont Attorney General Bill Sorrell and Chittenden County State's Attorney T.J. Donovan are expected to release results of an investigation into the raid.

Del Pozo pointed out things the DEA could have done differently to possibly reduce the danger to the public but defended the raid in general, saying nothing the DEA did was "beyond the pale." The chief also talked about the challenge of fighting drug crime and fostering safe police enforcement. Last year, Old North End residents and politicians chided police for allowing open drug dealing on North Street after a shooting across from the Sustainability Academy at Lawrence Barnes, an elementary school.

Del Pozo said police are trying to strike a balance and that the community must understand what police are up against. Stevens, not law enforcement officers, was "the most dangerous person on Elmwood Avenue," he said. The raid was   taken to "stop him from menacing the community," del Pozo said.

He went on to say that Burlington's packed blocks and wood-frame houses mean officers must take great care when shooting their weapons, because stray bullets can easily pierce walls and enter neighboring homes and apartments.

At one point during the meeting, del Pozo and O'Neill put two bullets on a conference table as the commission discussed the force and trajectory of various ammunition and firearms. One was a 5.56-millimeter bullet, similar to the ones agents fired during the raid from their AR-15 semi-automatics.*

The other bullet was a .40-caliber used in pistols that Burlington Police carry. Del Pozo said police are switching to a 9-millimeter bullet in the spring because it can be fired from a smaller gun that is suitable for all hand shapes, and because it is more accurate than the .40-caliber.

The discussion also touched on the fact that the Burlington officers involved in the raid were wearing balaclavas, masks that covered their faces. O'Neill objected to the masks as an unnecessary militarization of policing that scares the public. "I've never seen them before here and I find them incredibly disturbing," O'Neill said.

Del Pozo conceded that the balaclavas can be "alarming" to the public and said he doesn't like them. But they help conceal the identity of plainclothes police officers so that after they have taken part in an obvious police action, they won't be recognized, the chief said. It's particularly difficult for plainclothes detectives to stay unknown in a small city such as Burlington, according to the chief. "I think it's important for their identities to be protected," del Pozo said.

Correction, January 29, 2016: An earlier version of this post incorrectly referred to the AR-15s used in the raid as machine guns. They were semi-automatic weapons.