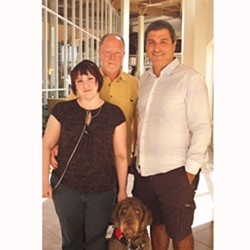 Rachel Phillips has lived a life of defying extremely long odds. Several years ago, she met an internationally renowned Italian surgeon who'd developed a medical procedure that promised to save her life from her deadly congenital condition.

Today, however, Phillips' good fortune may be that she never received that medical procedure. A story published in the January 31, 2016 issue of Vanity Fair seriously calls into question the credentials and ethics of the Italian-born doctor and reinforces what appears to be his ongoing pattern of lies and scientific misconduct.

In an August 3, 2011 story, Seven Days chronicled the medical travails of Phillips, a former world-class ballerina living in Burlington who suffers from Ehlers-Danlos Syndrome. EDS is an inherited, connective-tissue disorder that causes extreme hypermobility, or the tendency of limbs and joints to flex beyond their normal range of motion. Ironically, the physical trait that may have enabled Phillips to become such a successful ballet dancer threatens her life on a daily basis. Phillips’ EDS causes her trachea and bronchial airways to collapse each time she breathes, requiring her to be on supplemental oxygen at all times and frequently sending her to the emergency room because she's unable to breathe.

Phillips has spent countless days in the hospital and, at the time of the Seven Days story, had undergone at least nine unsuccessful surgeries to keep her airway open. But in 2010 she had a serendipitous break: During one such hospital stay at what's now the University of Vermont Medical Center, she connected with Dr. Paolo Macchiarini, a professor of regenerative surgery at the Karolinska Institute in Stockholm, Sweden.

Working with an international team of doctors, Macchiarini developed a method of growing a replacement trachea, or windpipe, in a laboratory using stem cells extracted from the patient’s own body. Coincidentally, during Phillips' hospitalization in Burlington, she met Dr. Daniel Weiss, a UVM pulmonary specialist and researcher who was using similar technology to bioengineer lungs. Weiss had met a colleague of Macchiarini's, who happened to be visiting Burlington for a medical conference.

Long story short, Dr. Weiss introduced Macchiarini's colleague to Phillips, who sent her tracheal scan to Macchiarini back in Sweden. Macchiarini reviewed the scan and agreed to perform an experimental tracheal implant on her — and waive all his fees. Phillips would have been only the 12th person in the world to get this procedure, which hadn't been approved yet by the U.S. Food and Drug Administration for use in the United States.

Macchiarini, whom I interviewed during his visit to Burlington in 2011, explained why he agreed to treat Phillips free of charge. “She’s a young and beautiful girl who had a beautiful past,” he said in a thick Italian accent. “She deserves to live.”

It turns out, Phillips may be alive today because Macchiarini never did the operation. Several others who underwent the same procedure have since died. And, as the New York Times reported in May 2015, Macchiarini was found to have committed scientific misconduct by omitting or falsifying information about his patients in a scientific journal.

Phillips' husband, Steven, whose day-to-day existence has been almost entirely consumed with keeping his wife alive, said, "We sort of found all that out about Dr. Macchiarini the hard way."

Subsequent to the Seven Days story, a combination of medical, financial and logistical complications prevented Phillips from traveling to Sweden for the procedure. Her medical condition has deteriorated since then and she still spends considerable time and money on specialists, hospital stays and medical procedures.

This week's Vanity Fair story, titled "The Celebrity Surgeon Who Used Love, Money, and the Pope to Scam an NBC News Producer," tracks Macchiarini's apparently fraudulent relationship with award-winning NBC News Producer Benita Alexander. She had met him while she was working on a two-hour Emmy-nominated special on him. In the VF story, journalist Adam Ciralsky chronicles how the jet-setting surgeon wooed Alexander with romantic getaways and seemingly implausible promises, including one that Pope Francis himself would officiate their wedding, even though she's Episcopalian and both were previously divorced.

For the Phillips, such disturbing revelations have only made them even more cautious and reinforced the notion that Rachel was lucky to avoid Macchriarini. In the years since the initial Seven Days story, Phillips has widened her network of specialists who've looked into her case. Currently, she's awaiting a far less invasive procedure that's slated to be performed by a doctor in Georgia. Unlike the one Macchiarini had promised her but never delivered, this one is approved by the FDA.

In a recent email, Steven Phillips wrote, "We also assume this [news about Macchiarini] will have ramifications within the regenerative medicine world. But in the end, it hopefully will have the effect of better protocols being in place to advance this vital research, which is needed by so many people. I will also say that there is a fine line between true courageous medical leaps of faith and personal bravado. On either side of that line, people's lives are at stake."