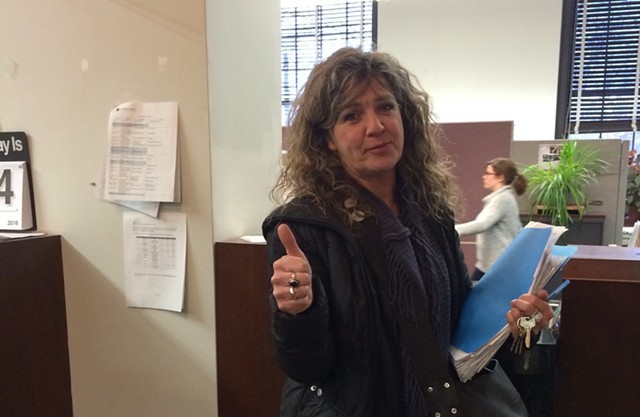 Next Monday, Burlington city councilors will need to make an uncomfortable choice — ignore a request from roughly 5 percent of voters or risk turning over decisions about city infrastructure to public opinion.

Karen Rowell successfully collected the necessary signatures to put the following question on Burlington's Town Meeting Day ballot: "Shall the city of Burlington keep four vehicular lanes on North Ave.?" The goal: Prove to public officials that the majority of New North End residents oppose a pilot project, scheduled for this Spring, that would temporarily reduce a four-lane stretch of road to three lanes, plus two bike lanes.

But the city attorney ruled that the question was too vague. Since it's too late for Rowell to circulate another petition, the city council will need to decide whether to put forward a rephrased version of the same question, in deference to the people who signed the original one.

Kurt Wright, a Republican who represents the New North End, plans to put forward a resolution that would do just that at next Monday's council meeting. The question would be advisory, not binding.

But here's the quandary: If the council votes to put Wright's question on the ballot — and if a majority of residents in the most-affected neighborhood strongly oppose the pilot project — the council and the administration will be under significant pressure to scrap a project they've already approved, unanimously.

Supporters of the pilot project have said it's important to at least test changes to North Avenue, and they note that city officials have pledged to restore the four lanes if the trial turns out to be a failure.

Among the proponents is Progressive Councilor Max Tracy, who opposes putting a reworded question on the ballot, arguing that the vagueness of the original question makes it too risky for councilors to try to guess at its intent.

Wright, who helped collect signatures for the petition, insists that the intent was "absolutely clear." He continued, "I think it would be a really horrible precedent to set for the city council to not put a question on the ballot because of some technicality."

Tracy, however, is concerned that a different precedent would be set if voters strongly oppose the pilot and the council decides to abandon it.  "I think this absolutely is the wrong way to go about doing transportation policy ... I don’t think we should put everything to a vote before we try things."

Mayor Miro Weinberger issued a memo Friday afternoon announcing that he does feel comfortable interpreting the petitioners' intent, and he supports putting Wright's question on the ballot.

At the suggestion of the city attorney, the new question states, “Shall the City Council, Public Works Commission, and Administration be advised to keep four lanes open to motor vehicles on North Ave. from the Route 127 access intersection north to the Shore Road intersection?”

But like Tracy, the mayor, who has publicly supported the pilot project, expressed qualms about letting public opinion dictate transportation projects. His memo continues, "I do not believe we should make complex transportation planning decisions by ballot item."

Wright declined to speculate about how the outcome of a vote on the ballot item would affect his position on the pilot project itself — "I really don’t want to go too far into conjecture on that."

Dave Hartnett, an independent New North End councilor, didn't support the petitioners' effort — he thinks people should wait until the pilot project is up and running to make a judgment — but now that they've gotten the signatures, he will support putting the revised question on the ballot. Although he's skeptical the project will actually improve North Avenue, he said he will continue to support the pilot, even if his constituents vote against trying the new configuration.