The makeshift wind turbine erected in front of the Statehouse, emblazoned with the governor’s last name, was the first hint. Then there were the sign-bearing protesters flanking the Statehouse doors.

Inside, in the halls of the Statehouse, the cafeteria and committee rooms, scores more were dressed in bright green vests to highlight their presence and emphasize the danger they feel.

Wednesday brought the biggest show of force yet by Vermonters upset with the state’s siting process for energy projects. What has in recent years been a relatively small group of wind opponents has grown into a legion of people worried about wind and solar, including town leaders from across the state.

“Now, it’s being taken more seriously,” LuAnn Therrien said of the opposition. Therrien has spent years speaking against the Sheffield wind project, which she said drove her family out of town.

The proliferation of solar projects around Vermont has changed the volume of the opposition, said Mark Whitworth, who is with the organization Energize Vermont. The group has long opposed decisions about the siting of wind projects, and it now finds new friends opposed to suggested solar sites. “That is what really has lit a fire under this energy rebellion. When it was wind in the Kingdom, it was pretty easy for people in other parts of the state to ignore it,” Whitworth said. 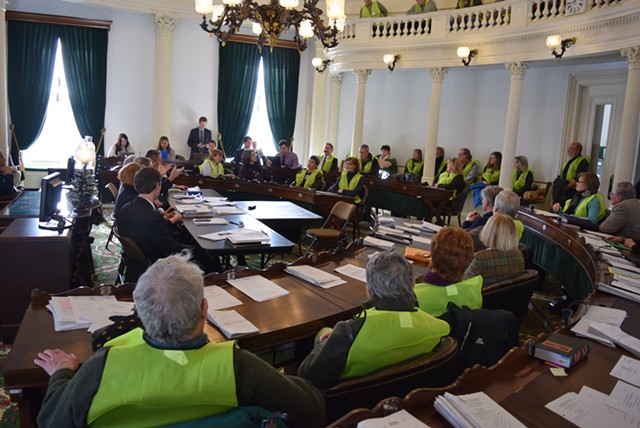 Now, many town officials are also fired up. The Vermont League of Cities and Towns, not exactly a rebellious organization, joined in Wednesday’s event. Nearly a dozen local officials testified to legislative committees about how their towns have spent thousands of dollars and still feel powerless during the process to determine renewable energy sites.

“We’ve been inundated with solar,” Russ Hodgkins, Westminster town manager, told the House Natural Resources and Energy Committee on Wednesday. He said his town supports renewable energy, but the locations chosen so far are taking prime agriculture and industrial sites out of the economy. “There’s not one of them that’s in a great location.”

Whether this growing throng of rebels will get their way is another matter. While they are railing against what they consider poorly sited projects, Gov. Peter Shumlin has been touting the growth of renewable energy and the jobs it brings.

Wednesday’s events — hours of meetings with the Senate and House Natural Resources and Energy committees and a noontime press conference and rally — were organized by Sen. John Rodgers (D-Essex/Orleans), author of a bill calling for a ban on industrial wind projects.

“In 1968, Vermont passed a landmark anti-billboard law,” Rodgers told those gathered for the press conference. The “billboard ban is what inspired me to do what I’ve known to be right for years, and that is introduce S. 210, to ban industrial wind from Vermont."

Prospects for a ban seem as weak this year as in previous years, however. “We’ll listen, but I think the problem with that proposal is we have an orderly development process,” said Sen. Chris Bray (D-Addison), chair of the Senate Natural Resources and Energy Committee.

Bray insists, though, that he’s working on changes that will help, at least on the solar front. “That is the most urgent need we are responding to,” Bray said.

His committee is putting together a bill — S.230 — that he hopes will offer incentives to build solar projects in specific locations and direct the Public Service Board to consider town plans in approving projects. Changes coming to the state’s net metering regulations will also likely slow down the proliferation of solar projects, he said.

Bray’s House counterpart, Rep. Tony Klein (D-East Montpelier), said he’ll await the Senate’s bill, but he agreed changes to energy-project siting should be made this year, even if there is not yet agreement on what those should be. He said, "There’s a pretty clear message that towns do not think they’re being heard.”