Judge Affirms One Seven Days Subpoena, Quashes Another | Off Message 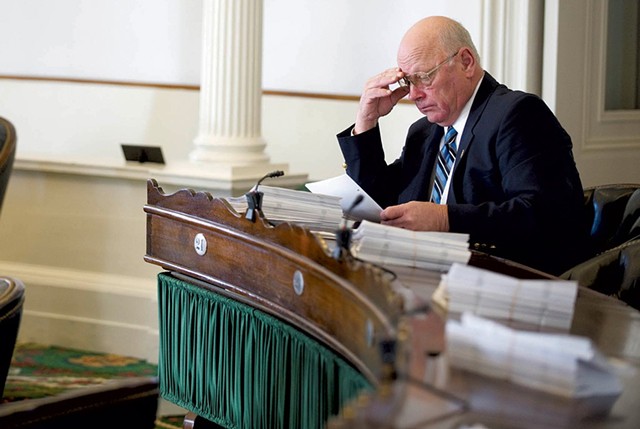 After Seven Days moved to have the subpoenas quashed, Wheeler withdrew Roy's, noting that he had not interacted with sources in the case. But she asked the court to order Heintz to testify about his interviews with an alleged victim and Davis to testify about interviews with McAllister. In both cases the journalists would have to surrender relevant notes or recordings.

McAllister was arrested last May on charges alleging that he sexually assaulted two women and solicited sex from a third in exchange for rent on a trailer he owns. Two weeks ago, the Senate voted 20-10 to suspend McAllister with pay while the court case is pending. He pleaded not guilty and has maintained that he is innocent.

In a story published last October, Davis quoted McAllister as saying, “I’ve never denied that I had sex with them."

Immediately after the Senate suspended him, McAllister told a group of reporters that he did not have sex with the younger of the two alleged victims, a woman who had worked for him last year at the Statehouse.

In his ruling, Mello said that McAllister could invoke his Fifth Amendment privilege and refuse to testify. “The State can also no longer interrogate the Defendant; Mr. Davis is the only source of the information,” Mello wrote.

Wheeler, the prosecutor, could not be reached Tuesday.

Vermont lacks a "shield law," which in other states protects journalists from having to reveal confidential sources and unpublished information that could be useful to law enforcement.

Three Vermont Supreme Court decisions govern law on the subject in Vermont. Quoting one of them, Mello wrote that journalists must show that "compelling the testimony would 'unduly burden the newsgathering function of the press.'"

Citing a 2005 case involving WCAX-TV, Mello noted that the Vermont Supreme Court had rejected special protections for news media “when the connection to a law enforcement purpose is real and not tenuous.” In the 2005 case, WCAX was forced to turn over unaired video footage of a riot at the University of Vermont.

Based on that legal precedent, Mello’s ruling upheld Wheeler's request to depose Davis and review his notes.

Mello ruled differently on Heintz, who reported in a story published last May that one of McAllister's alleged victims said the sexual contact with him began when she was 15 or 16 years old. (A police affidavit indicated only that it started in 2013, when she would have been 18.)

Prosecutors failed to show that they would be unable to get the same information by interviewing the woman themselves, Mello ruled. "The production of either Mr. Heintz's testimony or notes would be an undue burden on the press," the judge wrote.

“As Judge Mello rightfully acknowledged, compelling reporters to testify and turn over their reporting material risks turning the press into an investigative arm of the legal system," she said in a statement. "We’re pleased the court upheld Heintz’s First Amendment rights, but we are disappointed it did not do the same for Davis. He should not be made a witness of convenience. We will continue to fight for a free and vibrant press."