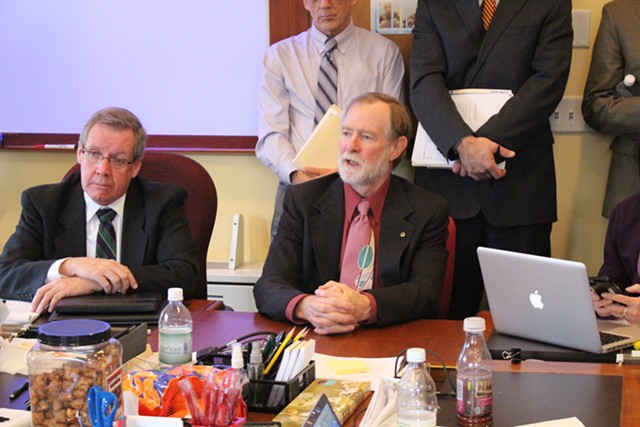 But the Senate and House committees have taken different approaches to the so-called Act 46 "fix," setting up messy debates on the floors of both chambers next week — and difficult negotiations between the two bodies, if their respective plans pass.

Wednesday afternoon in the Senate Education Committee, Sen. David Zuckerman (D/P-Chittenden) argued that the legislature erred in the closing days of last year's session by including the cost-containment provision in a bill that otherwise focused on encouraging school districts to consolidate. The provision capped per-pupil spending increases in next year's school budgets at 0 to 5.5 percent, depending on how much those schools spent this year. Spending in excess of those caps would be punished with a tax penalty.

According to legislative analysts, more than 125 districts are facing such penalties, partly due to a 7.9 percent spike in health care costs.

"Those towns that are hitting these thresholds are not necessarily towns that have been high-spending or are not as judicious with their budgetary process," Zuckerman argued. "Districts, and therefore the taxpayers in those districts, are being somewhat unjustifiably penalized for circumstances that are out of the school districts' control."

A bill Zuckerman introduced to repeal the spending thresholds passed his committee on a 4 to 2 vote.

Opposing it was Sen. Dustin Degree (R-Franklin), who argued that, while imperfect, the thresholds were appropriately forcing districts to take a hard look at their spending. He said he preferred a solution proposed by House leaders, which would retain the thresholds but provide more breathing room in next year's budgets.

"This is the only piece of cost-containment that we could get out of the Senate," Degree reminded his colleagues. "I think repealing these caps without something further and not having the time to discuss something further — and not even looking at what the House has done — is a bad idea. I just can't vote for full repeal."

A day earlier, the House Education Committee voted 11 to 0 for its plan, which would tack an additional 0.9 percent in allowable growth onto the existing spending thresholds. The committee's chair, Rep. David Sharpe (D-Bristol), argued Wednesday morning that recognizing "taxpayers' concerns over the cost of education are real and, at the same time, taking some of the pressure off [school districts] was the reasonable thing to do."

Speaking before the House Ways & Means Committee, Sharpe said his plan "represents a recognition that the 7.9 percent increase in health care premiums across the state for schools is making it difficult for many school districts to stay under the cost restraints under Act 46."

But Sharpe and his fellow House Democratic leaders face a tough balancing act as they attempt to assemble a majority to support the 0.9 percent plan on the floor. Some members of the House, such as Rep. Don Turner (R-Milton), the Republican minority leader, believe the thresholds should remain in place. Others, such as Rep. Janet Ancel (D-Calais), would like to see a full repeal of the cost-containment provision.

Ancel, who chairs the Ways & Means Committee, said Wednesday that even though she does not personally favor Sharpe's plan, she hopes her panel will approve it Thursday, allowing for a vote on the House floor next week. Time is of the essence, she said, because school districts are finalizing their budgets and need to know how much they will be able to spend.

"Although people on the committee are probably of several different minds, I think everyone agrees that we should do something quickly — and that means moving the bill that we have, as it is, as quickly as we can," Ancel said.

Gov. Peter Shumlin is also hoping for a quick fix. In his State of the State address last week, he called on lawmakers to repeal the thresholds or at least delay them for a year. Speaking Thursday in the Ways & Means Committee, his education secretary, Rebecca Holcombe, called them "arbitrary," "capricious" and "a distraction from the goals of Act 46." She urged lawmakers to act expeditiously in order to provide more certainty to school board members in the budgeting season.

"It really does need to happen by the end of the month, the change," Holcombe said.

When Ancel asked whether it would be "less helpful" if the fix came later, the secretary said, "It's not helpful." She paused and softened her position. "It's less helpful."

Holcombe reiterated Shumlin's preference for a full repeal, but she would not say whether the governor would veto Sharpe's 0.9 percent plan.

Joining the governor in calling for a full repeal is the Vermont branch of the American Civil Liberties Union, which has threatened to sue the state if it retains the threshold. The organization has argued that the provision is unconstitutional, because the variable caps would create inequities in education spending from town to town. Executive director Allen Gilbert said Wednesday that Sharpe's proposal would not satisfy his group.

"Yeah, we are gonna sue, because tweaking the caps doesn't remove the constitutional inequity," he said, citing a 1997 Vermont Supreme Court decision. "We think the principle in Brigham that you treat all kids equally in terms of the money that is available for their schooling is just a really important principle to keep. I mean, equal is equal and fair is fair."

Though most lawmakers appear eager to resolve the conflict quickly, House Speaker Shap Smith (D-Morristown) said Wednesday that he does not believe a fix will be in place before school districts print their proposed budgets at the end of the month. Though the governor and Senate favor repealing the thresholds entirely, Smith said, "I'm not sure there would be support for repeal" in the House.

"I expect the bill to come to the floor next week and I expect there to be a pretty vigorous fight," he said. "Based on the discussions we've had with our caucus members, they're all over the map on it."

As for whether voters will punish incumbent legislators if they fail to act quickly, Smith said, "My sense is that people vote in November, not March."