As his chief Democratic rival’s campaign accused him of breaking a pledge to avoid negative campaigning, Sen. Bernie Sanders (I-Vt.) doubled down Thursday night on his promise to run a clean campaign.

“I have never run a negative radio or television ad in my life,” he told a capacity crowd at a Dartmouth College auditorium in Hanover, N.H. “And it is my very strong hope that I never will.”

But, he added, “If people are distorting my record, as is the case right now, we are going to deal with it — and I have dealt with it.”

Sanders was alluding, perhaps, to a tough new television ad his campaign launched earlier Thursday, which made reference to former secretary of state Hillary Clinton’s relationship with the financial sector.

“There are two Democratic visions for regulating Wall Street,” Sanders says in the ad. “One says it’s OK to take millions from big banks and then tell them what to do.”

“We were particularly surprised today to see him break [his] pledge and run this negative ad,” Mook said.

Speaking at a press conference shortly before the Dartmouth rally, Sanders took the accusation in stride. When a reporter noted that the Clinton campaign was “mad at you today,” the senator quickly interjected.

Asked if airing the Wall Street ad was hypocritical, Sanders said, “No, that’s absolutely not true. And, by the way, I would counterpose that to an ad that Hillary Clinton put on yesterday that said, ‘Either you’re with the gun lobby or you’re not.' You tell me what that means!’”

Thursday’s back-and-forth came as new polls showed Sanders pulling ahead of Clinton in New Hampshire and catching up to her in Iowa. A survey released that morning by the Des Moines Register and Bloomberg found the two leading Democrats in a statistical dead heat in the Hawkeye State, which holds its caucuses February 1. 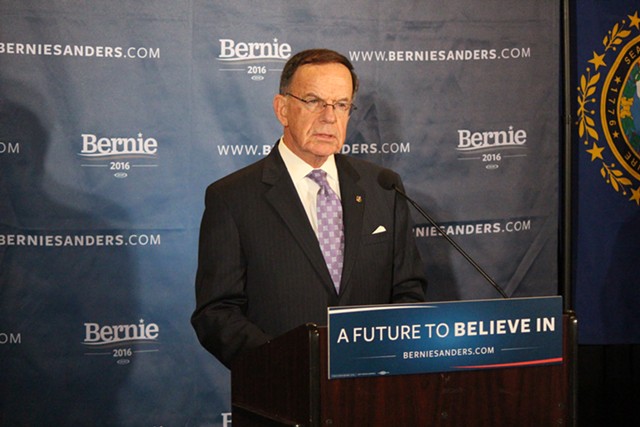 Sanders also picked up endorsements Thursday from former senator and Democratic National Committee chair Paul Kirk and from The Nation. Kirk, a close confidante and chief of staff to the late senator Ted Kennedy, appeared with Sanders at Thursday’s press conference and introduced him at the Dartmouth rally.

“To his great credit, of all the presidential candidates, Bernie Sanders is the one voice speaking consistently, courageously, passionately and credibly about what he and I — and I suspect most Americans — believe, but are unsure what they can do about it,” Kirk told reporters. “And that is that the core value of our democracy has been seriously endangered and needs to be renewed by this generation.”

The generation to which he referred turned out in full force Thursday night. College students and Upper Valley residents filled the 900-seat venue, along with several overflow rooms. The Sanders campaign called it the second largest crowd it has drawn in New Hampshire thus far. Hours before the event began, a line snaked through the Hopkins Center for the Arts and out into the bitter cold on Hanover’s East Wheelock Street.

Not everyone who made it inside Spaulding Auditorium was a registered New Hampshire voter. When Sanders mentioned his home state, just across the Connecticut River, audience members applauded and several pumped their fists in the air.

“Sounds like we’ve got a few Vermonters here,” he said. (One of them was Matt Dunne, a Democratic gubernatorial candidate from nearby Hartland, who appeared to be working the crowd for Vermont votes.)

At the start of his hour-and-fifteen-minute speech, Sanders allowed himself a moment to celebrate his recent surge.

“You know, about eight-and-a-half months ago, we began this campaign. And when we began, we had no money. We had no organization. We had very little name recognition around the country. Other than that we were in pretty good shape,” he said, drawing laughter from the crowd.

“And, not to mention, we were running against a candidate who was deemed by the media and the establishment as the inevitable — inevitable — nominee of the Democratic Party,” he said. “Well, a lot has changed! It turned out that what was considered to be inevitable may not be quite so inevitable.” Though Sanders is the oldest candidate in the race — he would be 75 when he took office — he consistently outpolls his opponents among young voters. College students in the audience Thursday night sounded particularly enthused about his plan to make higher education free at public institutions.

“It’s, like, not cool to like Hillary,” Middlebury College freshman Asher Brown, a Hanover native and New Hampshire voter, said after the event. “For a Democratic young person, Bernie’s definitely a hip candidate.”

“He’s a sensation,” echoed University of Vermont freshman Andrew Kazal, a New Hampshire voter who attended the rally with Brown and two other high school friends.

Judith Kaufman, a longtime Democratic activist from Cornish, N.H., said she was won over by the “inclusive” nature of Sanders’ campaign, noting that the senator was more prone to use the word “we” than “I.” And she said she wasn’t bothered by the increasingly “aggressive” tone of the Clinton campaign.

“I’ve seen dirtier campaigns in many different presidential election seasons,” she said, adding that she believed it was the news media, not the candidates, that was injecting negativity into the race.

Shortly before he left the stage Thursday night, Sanders said he would only have time to take a few questions.

“I’m in debate prep right now,” he explained, referring to Sunday’s televised debate in Charleston, S.C. “I’ve gotta go back and do my homework.”