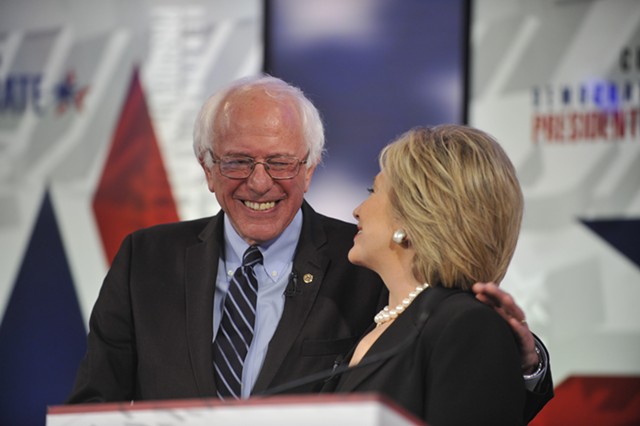 A trio of new polls released Tuesday indicate that Sen. Bernie Sanders (I-Vt.) is gaining momentum in his quest for the Democratic presidential nomination — in Iowa, New Hampshire and throughout the rest of the country.

Sanders, who has long trailed former secretary of state Hillary Clinton in Iowa, is now leading her 49 percent to 44 percent among likely Iowa Democratic caucus voters, according to a new Quinnipiac University survey. A month ago, the same polling outfit showed Clinton leading Sanders by nine percentage points.

"Iowa may well become Sen. Bernie Sanders' 'Field of Dreams,'" Quinnipiac University Poll assistant director Peter Brown said in a written statement. "Sen. Sanders' surge seems based on the perception by Iowa Democrats that he is a better fit for Iowans. They see him, by solid double digit margins as more sharing their values, more honest and trustworthy and viewed more favorably overall than is Secretary Clinton."

The Q-Poll, whose margin of error was plus or minus 4.4 percentage points, found that only 3 percent of Iowans were undecided — and only 20 percent of those who have chosen a candidate would consider changing their mind. Just 5 percent supported former Maryland governor Martin O'Malley.

The Iowa caucuses are scheduled to take place February 1.

In New Hampshire, Sanders has pulled 14 points ahead of Clinton, according to a separate poll of likely Democratic voters conducted by Monmouth University. There, he leads her 53 to 39 percent, the survey found, while O'Malley has support from 5 percent. The margin of error for the Monmouth poll was plus or minus 4.8 percentage points.

Sanders and Clinton have regularly traded leads in New Hampshire since last October, when the Vermonter last held such a stark advantage. Now, according to Monmouth, Sanders is doing better than Clinton with nearly every demographic group, including women and older voters, who have been more likely to support his rival. More than half of those surveyed said they are "completely decided" about whom they will support, while another 32 percent said they have a "strong preference" but are willing to budge.

"New Hampshire Democratic preferences are getting baked in, with Sanders gaining the upper hand," Monmouth University Polling Institute director Patrick Murray said in a written statement. "The final question will be who does a better job at turning out their respective voting blocs."

The New Hampshire primary is scheduled for February 9.

A third, nationwide poll, conducted by the New York Times and CBS News, found that Clinton leads Sanders just 48 percent to 41 percent among Democratic primary voters throughout the country. A month ago, a survey conducted by the same organizations had her 20 points ahead of him. Nationally, the new poll found that young voters were twice as likely to support Sanders as Clinton, but seven in 10 believed Clinton would ultimately prevail.