After 18 Months on the Lam, Murphy the Dog Rescued | Off Message

After 18 Months on the Lam, Murphy the Dog Rescued 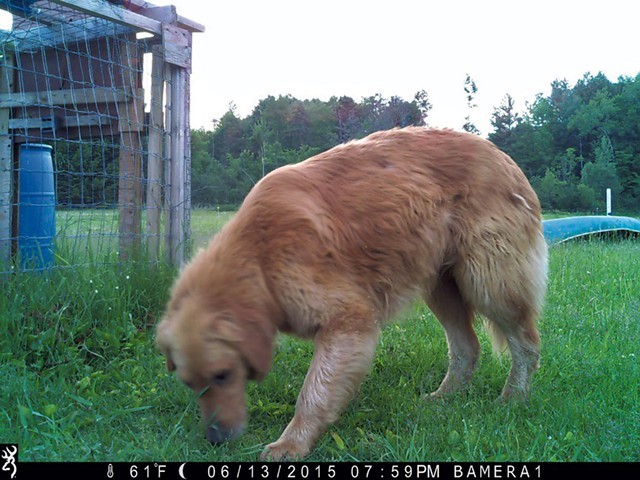 After 559 days of roaming the Morrisivlle/Waterbury corridor after being spooked by a car accident, the golden retriever whose escapades captivated the region was captured in a trap on Saturday night.

He has been reunited with his owners in Morrisville, who were aided in their search by a band of volunteers who deployed traps and game cameras and coordinated responses to a slew of reported sightings.

Murphy was in the backseat when Kristin Campbell drove her car into a tree in June 2014 in Stowe. When Campbell opened the car door, he dashed away. The family believes he may have been spooked by would-be rescuers who tried to catch him in the hours after the incident. He is believed to have survived in the woods ever since.

The rescue efforts were spearheaded by Waterbury resident Wilson Ring. Murphy began making regular visits to Ring's home shortly after his escape. Ring, Campbell's grandfather Ed Hamel and other volunteers built and continually monitored a humane trap for the dog in his yard.

But on numerous occasions Murphy managed to eat food used as bait without becoming trapped. Once when he was trapped, he chewed his way through the contraption minutes before volunteers arrived to scoop him up.

Over the summer, Murphy stopped frequently visiting the Ring home, but in recent weeks he had began making more appearances, raising hopes that he would be caught before spending another winter outside.

Finally, Saturday night, Murphy was caught in the trap, and returned home. Community members have donated about $600 to help with the dog's upcoming medical appointments.

Upon Murphy's return, Hamel told WCAX-TV that Murphy remains "Pretty much exactly like he was. It was so amazing when he walked in the house last night, it was like a light bulb came on. 'Hey, I'm home! I know you people, and there's my toy!'"