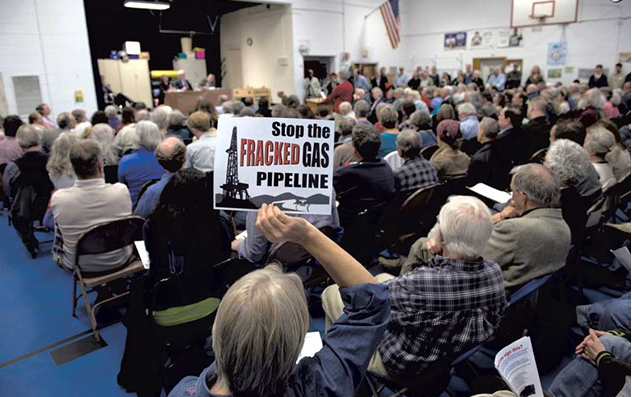 Vermont Gas Systems got its long-awaited go-ahead Friday from the state Public Service Board to continue building a controversial 41-mile natural gas pipeline from Colchester to Middlebury.

The board ruled that project is still in the public good — even after its price tag leapfrogged from $87 million to $154 million.

Opponents had asked the board to reconsider the project's certificate of public good based on the price increase and the availability of other price-competitive fuel options.

“The general good of the people of Vermont would best be served if the proceeding is not reopened,” the board said in its ruling.

Friday’s decision incorporates an agreement with the state that Vermont Gas will limit the amount of the cost it seeks to recoup from customers to $134 million, with the company absorbing the other $20 million. The decision Friday came just in time to meet Vermont Gas’ deadline by which it said it needed an answer to keep the project viable.

Vermont Gas heralded the news, while opponents decried it as an indication the state’s regulatory system is deeply flawed.

“Our team will now be able to turn its full attention to the important planning and preparation necessary for our upcoming construction season,” Vermont Gas said in a written statement Friday afternoon. “Our focus remains on completing this project on time and on budget at the end of 2016.”

Two groups that opposed the project, Just Power and Toxics Action Center, said Friday they don't trust the Department of Public Service’s ability to hold Vermont Gas accountable. “We’ve been alarmed by DPS’ blind support of VGS, including the shifting of goalposts to accommodate VGS’ cost increases and delays,” they said. “We have little confidence that VGS’ pledged rate cap will hold. Ratepayers will not be able to enforce the agreement, and we have yet to see DPS do anything but VGS’ bidding since review of this pipeline began four years ago.”

The project has been the subject of significant protests from landowners who are upset that a pipeline will pass through their properties, and renewable energy advocates who argue that the pipeline will perpetuate a reliance on fossil fuels.

Work has already started on the project’s first leg, from Colchester to Williston and beyond. In recent weeks, crews dug a trench for the pipeline through the intersection of Routes 116 and 2A in St. George and across Rocky Ridge Golf Course. The company is also in the midst of eminent domain hearings with property owners in the Monkton area who have refused to grant rights-of-way.