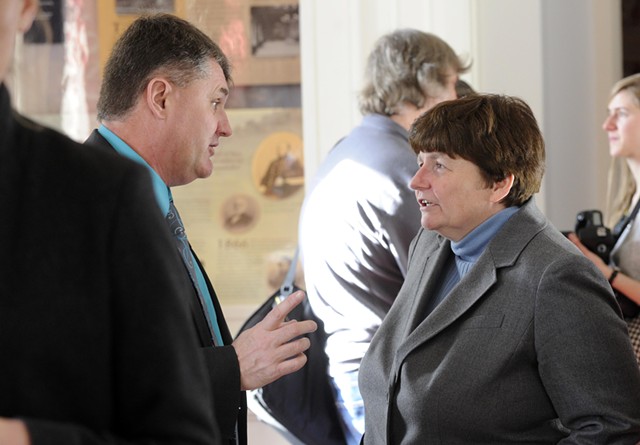 “I believe that divestment is not the appropriate strategy for our fund and is counter to our fiduciary responsibilities to the fund and its beneficiaries,” Pearce said in a statement issued Friday morning.

In his State of the State address the day before, Shumlin proposed following California's lead in divesting from coal-extracting companies. He also called on the state to immediately rid itself of ExxonMobil stock while studying divesting from other oil companies.

“The urgency for us to take every sensible action against climate change has never been greater,” Shumlin said in his speech.

Thursday's announcement was a marked shift for the governor.

In September 2014, Shumlin said he agreed with Pearce that divestment was not a good idea, arguing, as she does, that owning stocks gave the state "a seat at the table with oil companies." He told Seven Days at the time that he was "willing to take a look" at divestiture, but that doing so was not "the sharpest knife of all the things that we could do."

Eric Becker, chief investment officer of Clean Yield Asset Management, a group advocating for divestment, said Vermont has an estimated $1.2 million invested in direct coal holdings and $270,000 in ExxonMobil, plus other investments through indexed funds.

In July, the state Pension Investment Committee voted unanimously against divesting from fossil fuels, either partly or completely.

In her statement, Pearce said that "legislating investments is an inappropriate practice." But she said she would work with the governor and legislature to find alternatives to “meet the same objectives without putting taxpayer dollars and retirement security at risk.”

Shumlin appears to be putting his own money where his mouth is.

When he ran for governor in 2010, Shumlin revealed that more than $462,000 of his $10.7 million in personal assets was invested in seven major oil and gas companies, including Pioneer Natural Resources, Occidental Petroleum Corporation and Cabot Oil & Gas. Asked in 2014 whether he still owned the stocks, Shumlin's office refused to say.

On Friday, Shumlin spokesman Scott Coriell said, “The Governor's portfolio reflects exactly what he is proposing for Vermont. He owns no coal or ExxonMobil stocks.”

Asked whether his boss had sold off his oil investments, too, Coriell did not respond.