Vermont Trump Backers: There Are More of Us Than You Think | Off Message

Vermont Trump Backers: There Are More of Us Than You Think

You might think it’d be hard to be a Donald Trump supporter in Vermont, the home of Sen. Bernie Sanders (I-Vt.), where the highest-profile Republicans have denounced the unorthodox billionaire businessman-turned-presidential candidate.

Not so, says Mary Gill-Warren, a 47-year-old Shoreham dairy farmer.

“There’s a lot more supporters for him than people realize,” Gill-Warren said.

She, her husband and some friends are planning to attend Trump’s rally Thursday night at the Flynn Center for the Performing Arts in Burlington. While much of the attention about Trump’s visit has focused on Trump opponents’ plans to protest, some Vermonters are also eager to hear a candidate who they praise for speaking his mind.

Patti Williams of Hardwick hopes to attend with her husband, her son and his girlfriend. Williams said she hasn’t made up her mind about which candidate she’s supporting, but Trump is in the mix.

Like Gill-Warren, Williams said she’s not faced any grief as a Trump sympathizer, adding, “You’d be surprised how many people say, ‘If I had to vote now, I’d vote for him.’”

Williams does get riled, though, when she sees comments from Trump opponents hoping to shut him off from speaking. “That’s crap,” she said. “People are so intolerant of other people now.”

Trump’s visit has set off a flurry of dissent among Vermonters who plan protests and vigils against a man they argue is racist, sexist and belligerent.

Gill-Warren sees him as none of that. “Trump seems to speak what’s on his mind,” she said. “He’s not a racist.”

As Gill-Warren listed reasons she supports Trump, she sounded briefly as if she was talking about Sanders, who is seeking the Democratic presidential nomination. She opposed the war in Iraq, is against foreign trade agreements such as NAFTA, thinks the media is out to get her candidate and that it’s time for “something radically different.”

But the lifelong Vermonter, who said she typically votes Republican, looks to Trump as the candidate who most mirrors her views. Gill-Warren dismisses Sanders as a radical who people don’t take seriously and sees his plan to raise taxes on the wealthy to provide free college tuition as discrimination against the rich.

And Gill-Warren differs sharply with Sanders on immigration, instead championing Trump’s hardline stance. Building a wall between the United States and Mexico, as Trump has advocated, will help stem the flow of undocumented immigrants, she said. And she contends Trump’s statements about Muslim immigrants have been misconstrued.

When Trump says the United States should halt immigration of Muslims, he means temporarily, until the country comes up with better screening, she said. As a temporary measure, Gill-Warren said, she doesn’t think barring people based on their religion violates the Constitution.

“The media has a great way of twisting words,” she said. “The first thing you do to address a problem is admit that there is a problem. Trump’s not afraid to talk about it.”

As Trump’s bluntness attracts some supporters, it also drives others away.

Vermont’s highest-profile Republicans have distanced themselves from Trump. Lt. Gov. Phil Scott said of Trump at a September debate, “He’s so offensive." The Vermont Republican Party, which welcomed presidential candidates Rand Paul and John Kasich last year, quickly noted it has no connection to Trump’s visit.

Two Vermont couples with strong Republican ties took out a full-page ad in Thursday’s Burlington Free Press in which they asked Trump, “Have you no shame?”

Tom and Mary Evslin of Stowe and Tim and Susan Hayward of Middlesex lit into Trump for his four business bankruptcies, for embracing the endorsement of Russian President Vladimir Putin and for using political connections to win business favors.

“America is great. Not perfect, but great,” they said in response to Trump’s call to make America great again.

Chet Greenwood, Orleans County Republican chair, has mixed feelings about Trump. He said he plans to attend Trump’s rally, but he said the business tycoon “wouldn’t be my first choice.”

“He has some good ideas, but his rhetoric is not to my liking. He talks like he hates everybody,” he said. Greenwood defended Trump as a candidate, however, for “saying some of the things other candidates won’t.” Greenwood said he senses Trump’s campaign temperament is bluster and that he wouldn’t act that way if elected. “He couldn’t build an empire the way he talks,” he said.

Williams said Trump’s business experience as a developer appeals to her. Despite his business bankruptcies, she said, “I do consider him a successful businessman. He’s certainly had more successes than failures.”

Still, Williams said she’s not entirely sure Trump will be the right candidate in the end. “I know a lot of people are not for Trump. My biggest concern is we get [Democrat] Hillary [Clinton] in the White House. I want to make sure we get a Republican.”

Thursday night, she hopes to hear Trump unfiltered, live and in person, hoping it will give her a clearer view of what the candidate is really like. “I want to hear what he says when I’m listening to him,” she said.

Here's the ad in Thursday's Freeps: 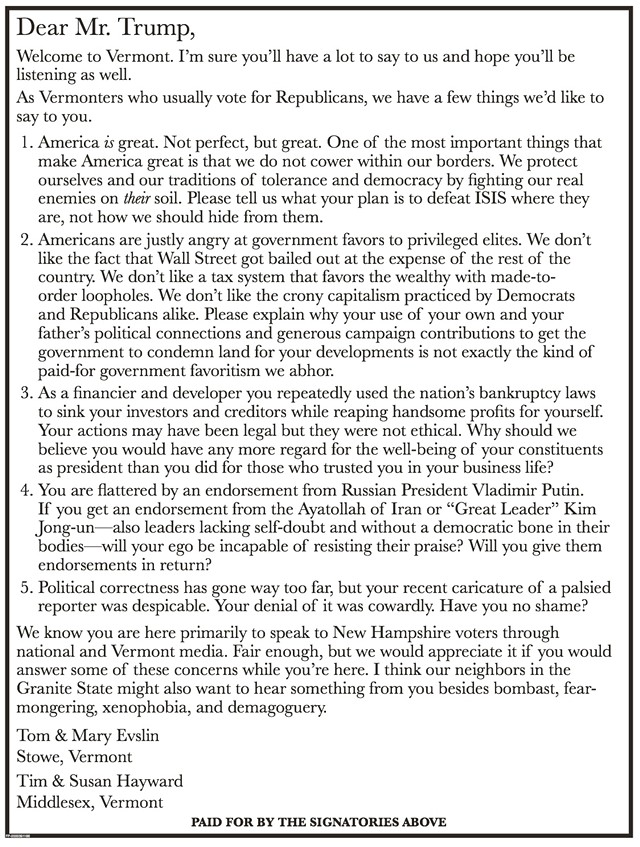