Protesters and Trump Supporters Square Off in Burlington | Off Message

Protesters and Trump Supporters Square Off in Burlington

by Molly Walsh and Mark Davis

On one side of Main Street in Burlington on Thursday night stood hundreds of Donald Trump supporters who had waited in line for hours to hear their man inside the Flynn Center for the Performing Arts. On the other side stood hundreds of protesters who had assembled for a march and a candlelight vigil.

The scene served as metaphor for modern American political life: two groups standing on opposite sides of the street, yelling over each other while dozens of reporters ogled them.

“Racist, fascist, anti-gay, Donald Trump, stay away!” dozens of protesters chanted across the street from the Flynn, after finishing a brief march down Church Street.

“Get a job, Get a job!” Trump supporters standing in line shouted, before resorting to “Build a wall, build a wall.”

One Trump supporter, while scampering into JP’s Pub, faced the demonstrators across the street, flipped them off and screamed “You dirt bags! Suck it, motherfuckers.”

“Get an education,” a few of the demonstrators yelled back.

In the middle of Main Street, which was closed to traffic, dozens of Burlington police officers stood between the camps, which both numbered several hundred people.

The cacophony was, at times, deafening. But if you approached people individually, you found — usually — a quiet earnestness.

“I just want to hear what he’s got to say,” said Milton resident Darren Adams, who got in line at 1 p.m. for Trump’s appearance, which had been scheduled for 7 p.m. “Everybody has a right to be heard.” Nodding at anti-Trump protesters across the street, Adams said. “It’s all part of the process. We appreciate their right to be heard, too.”

Many Trump supporters said they don’t usually get involved in politics. But they were excited by Trump’s business chops.

“He’s not a politician, he’s a businessman,” Barre resident John Apfel said. “He’s got the ability to get things going.”

Standing nearby was 12-year-old Gage Rucki, who had to research a candidate for a social studies class. Rucki drew Trump, and dove into his assignment. His mom, Sarah, was excited to see him take an interest. She took him out of school a bit early Thursday so they could come see Trump.

“He watches Fox News; he knows everything about politics,” Sarah Rucki said.

Others brought children to the spectacle, too. Belynda Jestice of Plainfield attended the protest with her 11-year-old son.

"What I've heard from Donald Trump is fascism and it's very scary," she said. Trump's attitudes about women are troubling, Jestice said. "The misogyny really bothers me. The comments about women I find very offensive." 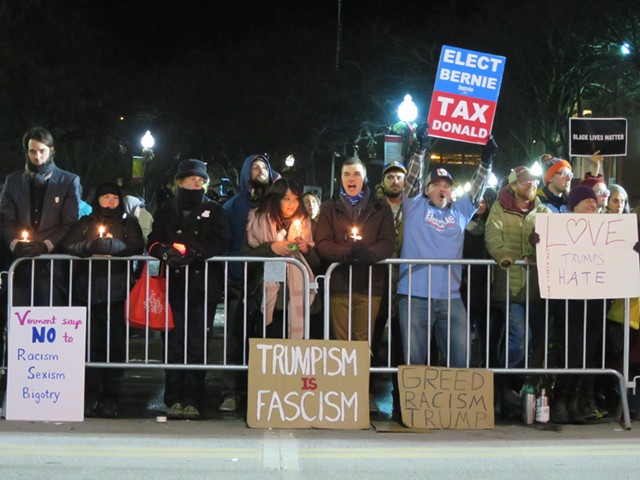 Thomas Gram drove from Montpelier to protest Trump's visit and make clear that "Vermont does not put up with all his bigotry and racism. We're not going to accept a hate rally in our state," he said.

Burlington Mayor Miro Weinberger, a Democrat, walked through the crowd chatting with people and surveyed the scene shortly before 7 p.m.

"So far, so good,” the mayor said. He said had no plans to go inside.

Two 20-something buddies walked up around 4:30 p.m., thinking they had arrived in time to get a seat. But then they surveyed hundreds of people in a line that snaked around several blocks.

“Fuck it, let's go get drinks,” one said, and they bailed.

Some demonstrators were creative. Three costumed people, one in a Darth Vader mask, carried a banner that said: The Dark Side for Trump. 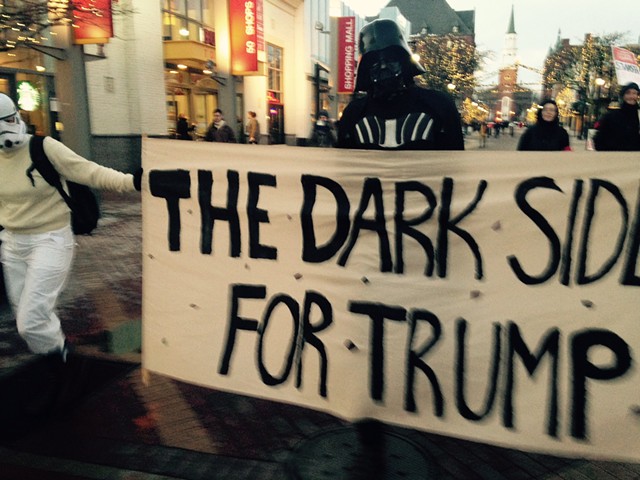