Burlington Braces For Trump; Line Begins At 4:30 a.m. | Off Message

by Mark Davis and Alicia Freese 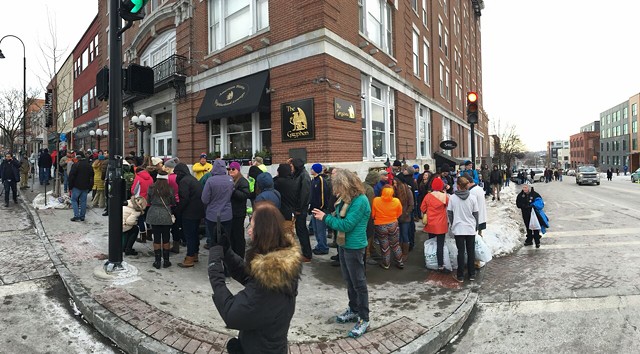 Let the record show that, on the day The Donald was scheduled to descend on the Queen City, the line began forming before the sun rose. And the first person to arrive was not a supporter.

"When the police chief said you could show up with a ticket and not get in, I took that as a challenge," said Burlington resident Mark Conrad, who stood in the darkness by himself when he arrived outside the Flynn Center for the Performing Arts at 4:30 a.m.

Conrad is no fan of Trump's and hopes to be able to razz the Republican presidential contender during his scheduled 7 p.m. appearance.

"I just want to ask [Trump] a question that will bother him."

Burlington has been on alert for a fiasco since Wednesday, when the Trump campaign announced it had given out roughly 20,000 tickets for the 1,400-seat Flynn. Police warned that they would have to close downtown streets and turn away thousands of people from the Flynn. Meanwhile, liberal activists scheduled multiple events for later this afternoon to protest Trump's appearance. Local and national media, unable to resist the narrative of Trump holding court on Bernie Sanders' turf, prepared to swarm the area.

But the day got off to a tranquil start.

By 11 a.m., Conrad and a few dozen people quietly waited in line on the Main Street sidewalk.

A group of Trump supporters from the Plattsburgh area joined Conrad in line at 9 a.m. They said they admired Trump for campaigning in a liberal hotbed. "He's coming into the hornets' nest," said Michael Hart, of Ausable, N.Y. "You've got to have some cojones to do that. It's a once-in-a lifetime thing."

Many said they were upset by Vermont activists who planned protests and initially called for the Flynn to ban Trump from appearing. "That's so un-American," Plattsburgh resident Martin Deslauriers said, as television satellite trucks idled across the street at City Hall Park "They say they want free speech, but if it's not what they think, it's not free speech." 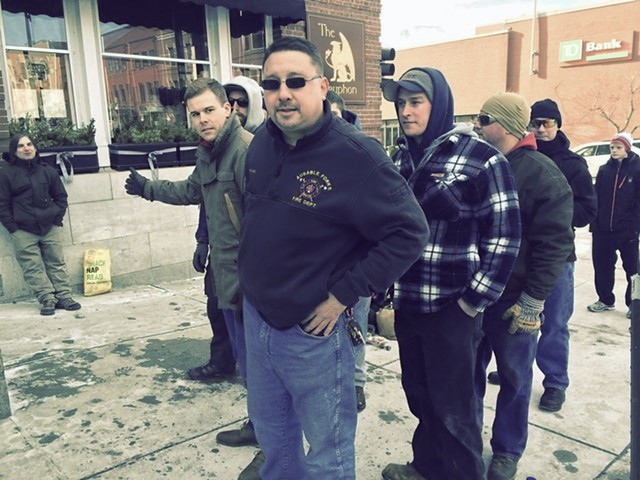 As the men spoke of their affection for Trump, Burlington resident Carol Wooster, standing in line behind them, approached a reporter and whispered: "I'm actually for Hillary. I want to give Trump the finger or something. And I want to see the circus."

Burlington Police Chief Brandon del Pozo was among several police officers on the scene Thursday morning. Del Pozo declined to disclose how many police officers will be assigned to the event, but said it would be comparable to the deployment for the Vermont City Marathon or the 4th of July celebration. The Vermont State Police and the Chittenden County Sheriff’s Department were also scheduled to help, del Pozo said.

Del Pozo said his department had been working closely with the Trump campaign until Wednesday, when the police started pressing campaign officials for estimates of the anticipated crowd and their plans for managing it. At that point, the chief said, Trump staffers stopped returning the department's calls.

"We were trying to get assurances that there was a plan to manage the crowd that would show up, and their stance was that they would provide a safe event on the inside, but the crowd outside was our responsibility," del Pozo said.

Mayor Miro Weinberger’s administration said it plans to send a bill to Trump after the event for the police overtime and other costs. But there’s no guarantee that the city will be reimbursed — it billed President Barack Obama after his 2012 Burlington visit, without success.

People who definitely won’t be compensated: Parents who have to leave work early to pick up their children. The Edmunds Elementary and Middle Schools — located on Main Street several blocks from the Flynn — are asking families to retrieve their children from the after-school childcare program an hour early, at 4:30 p.m., to minimize traffic snarls.

Considerably less stressed were the folks at the Kountry Kart deli, the sandwich shop adjacent to the Flynn. The deli was preparing to do a brisk business and perhaps make afternoon deliveries to hungry Trump fans unwilling to lose their place in line. For the low low price of $20.16, they were offering, a special sandwich, The Donald: plain bologna on white bread, filled with bacon slices, or, as the deli was calling it ... B.S.