Montpeculiar: An Ice Rink on the People's Lawn? | Off Message

Montpeculiar: An Ice Rink on the People's Lawn? 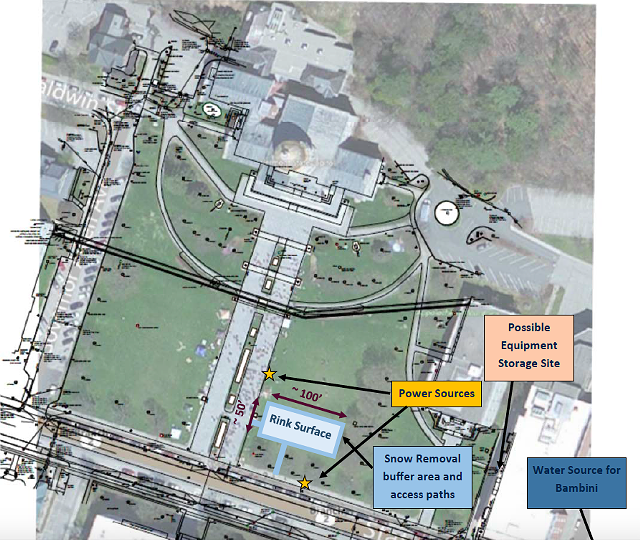 It should come as no surprise that Mike Obuchowski considers the Statehouse lawn “sacred ground.” He was elected to the legislature at the age of 20, served there for 38 years, including six as House speaker. Now, as commissioner of the Department of Buildings and General Services, his office sits spitting distance from the Statehouse and its sweeping lawn, a place where friends and foes of state policy routinely gather for rallies.

It is up to Obuchowski to decide whether to allow a wintertime outdoor skating rink to be assembled on that special place. “The Statehouse lawn is a public forum. It’s a place where people can come and  express themselves,” Obuchowski said. “To me, that almost makes it sacred ground in terms of small ‘d’ democracy.”

A group called “Put a Rink On It” has proposed setting up a 50-by-100-foot rink on the east side of the lawn near State Street. Organizers have the support of the city of Montpelier and have raised about half of the $20,000 they think they’ll need to erect and operate the rink, said Nate Hausman of Montpelier, who, along with Kim McKee, is championing the effort.

“It’s a space we thought doesn’t get a lot of use in the winter,” Hausman said, describing the idea as starting off half-baked, before it began whetting appetites around town.

The group envisions local residents and tourists skating Wednesday through Sunday afternoons until 7 p.m. Volunteers would supervise. Hockey games wouldn’t be allowed. The plan is to use a simple skating rink kit called Porta-Rinx, which costs $3,195 and would be dismantled come spring.

But who gets to decide whether they — or anybody — can use the lawn of the “People’s House?” That's Obuchowski’s department.

The rink request is much like a permit for an extended rally, Obuchowski said. BGS routinely grants permits for groups to put up tents, bring in bands and banners and express themselves just about any way they see fit, as long as they’re not selling anything. Approving those requests is generally about whether the events pose a liability to the state. “It really boils down to risk management,” he said.

The risk in this case is a little different from that created by a typical daylong rally. Obuchowski wouldn't say which way he's leaning on approving this project, but he wonders what the lawn will look like in the spring, when the ice melts and the rink is dismantled. He said, “We don’t know what happens when you put down plastic, then put down six to eight inches of water."

Hausman’s group has provided BGS with detailed plans for insurance, has agreed to increase its reserve account for restoring the site in spring and listed 28 people who've volunteered to pitch in with managing the rink.

Hausman, a clean-energy lawyer who describes his skating ability as “poor,” has been studying how to run an outdoor ice rink since he became smitten with the idea. In the last year, he and McKee have watched their once-whimsical idea gain traction, have won over the city's mayor and council and earned a grant from the National Life Group.  He’s even acquired a pair of ice skates.

He should know soon whether he might ever get to use them on the Statehouse lawn. Obuchowski said he expects to make a decision within a week or so. If the group gets the go-ahead, the next big challenge may be making ice. The forecast doesn’t offer much hope for freezing.