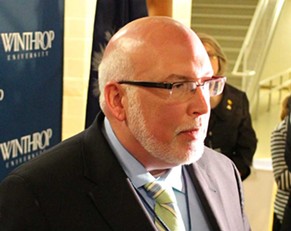 Speaking at a press conference outside Sanders’ Washington, D.C., office, campaign manager Jeff Weaver threatened to take the DNC to court later Friday if it did not restore access to the voter data, which he called “the lifeblood of any campaign.”

“Individual leaders of the DNC can support Hillary Clinton in any way they want,” Weaver said. “But they are not going to sabotage our campaign — one of the strongest grassroots campaigns in modern history.”

Weaver’s blistering words followed the DNC’s decision Thursday to suspend the Sanders campaign from using the party’s voter database, which is maintained by vendor NGP VAN. The system allows individual Democratic campaigns to layer proprietary information — such as the identities of supporters, donors and volunteers — on top of communal data without allowing other campaigns to see it.

But as the Washington Post first reported late Thursday, the Sanders campaign managed to access information belonging to the Clinton campaign Wednesday. The data became available for a brief period that day as NGP VAN performed a software upgrade.

Once the DNC became aware of the situation, Wasserman Schultz said, “We directed NGP VAN to suspend the Sanders campaign’s access to the system until the DNC is provided with a full accounting of whether or not this information was used and the way in which it was disposed.” She did not immediately say how long Sanders’ suspension would last.

Weaver acknowledged Friday that “some of our staffers irresponsibly accessed some of the data from another campaign.” He called the actions “unacceptable” and said that one staffer had been fired. He said the campaign was investigating whether others were involved.

According to the Clinton campaign, as many as four Sanders staffers may have been involved in the incident.

Josh Uretsky, Sanders' former national data director, identified himself to several media outlets Friday as the fired staffer. Speaking on MSNBC that afternoon, he denied perusing the Clinton data for nefarious reasons. He said he had been “trying to create a clear record of a problem before reporting it.”

Uretsky said the situation was as if, “Somebody leaves the front door open and you left a note inside the front door saying, 'You left the door open.' And then maybe you went and checked the side door, too, to make sure that door was closed.”

Wasserman Schultz made a similar analogy Friday in an interview with CNN, but she took it in a different direction.

"That is just like if you walked into someone's home when the door was unlocked and took things that don't belong to you in order to use them for your own benefit," the party chief said. "That's inappropriate. Unacceptable."

During Friday's press conference, Weaver also took aim at NGP VAN, which he accused of “dangerous incompetence.” He said the vendor had “allowed serious failures to occur” multiple times and that the Sanders campaign had previously reported such failures.

“At that time, our campaign did not run to the media,” Weaver said, in an apparent swipe at the Clinton campaign.

Turning his attention to the DNC, he said the party apparatus’ decision to suspend the Sanders campaign’s use of the database as an “inappropriate overreaction.” He said the campaign had “invested enormous campaign resources” into acquiring the data.

“This is the information about our supporters, our volunteers, the lists of people we intend to contact in Iowa, New Hampshire and elsewhere,” he said. “This is information that we have worked hard to obtain. It is our information, not the DNC’s.”

Weaver’s charges escalated a long-simmering conflict with the DNC, which it has accused of sanctioning few debates and scheduling many of them on weekend nights when viewership is low. A third debate is scheduled for this Saturday in Manchester, N.H.

Weaver said that it “looks like in this case" that the DNC was "trying to help the Clinton campaign.”

In an email to supporters later Friday afternoon, Weaver said that the Democratic Party “establishment” would have “preferred a coronation over a competitive campaign.” He said that Sanders’ success had “caused the Democratic National Committee to place its thumb on the scales in support of Hillary Clinton's campaign.”

The email, which asked Sanders supporters to sign an online petition calling for “a level playing field,” was titled, “Urgent: DNC tipping the scales for Hillary Clinton.”

Two progressive groups came to Sanders’ defense Friday. In a written statement, MoveOn.org director of analytics Milan de Vries blamed the DNC for the data breach and said that “punishing the Sanders campaign … is unnecessary and misguided.”

Democracy for America executive director Charles Chamberlain called the DNC’s decision “profoundly damaging to the party’s democratic process” and said it “does even more to bring its neutrality in the race for president into question.” DFA endorsed Sanders Thursday.