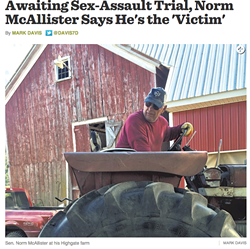 Prosecutors in the sexual assault case against Sen. Norm McAllister have issued subpoenas for three Seven Days journalists, seeking information they gathered for news articles related to the case. The newspaper is fighting the subpoenas in court.

That appearance has since been delayed at Seven Days' request, Wheeler said.

Davis and Heintz wrote news articles that included material from interviews with the senator, and Heintz interviewed one of his alleged victims. Heintz has also written political columns about McAllister.

McAllister, who was arrested May 7 at the Statehouse in Montpelier, has pleaded not guilty to three felony counts of sexual assault and three misdemeanor counts of prohibited acts.

Seven Days is seeking to have the subpoenas quashed in court.

“As the founders recognized, democracy requires a free and vibrant press. That freedom is threatened when lawyers demand to put reporters on the witness stand, peer into their notebooks and otherwise deputize them as agents of law enforcement," Paula Routly, the paper’s publisher and coeditor, said in a written statement. "Seven Days is serving its readers by reporting this story — and standing up for the First Amendment by challenging these subpoenas."

The newspaper’s lawyer, Robert Hemley, argued in court papers last week that the Vermont Supreme Court has upheld that lawyers cannot demand reporters reveal information without proving there is no other way to obtain the information and that it’s vital to proving innocence or guilt.

“The information sought is available from other sources, namely, the quoted individuals themselves,” Hemley said in court papers seeking to have the subpoenas quashed.

Wheeler said she issued the subpoenas because Seven Days' staffers spoke directly to McAllister and one of the victims. "Anyone who has any contact with the accused in the case, we depose," she said. She declined to say what, if any, particular information she would seek from the journalists. "It's not the fact that they're journalists. It's the fact that they are witnesses."

McAllister’s attorney, Brooks McArthur, said he plans to join in the request to have the Seven Days writers appear for depositions in the case and to be available to testify at McAllister’s trial.

McArthur said he is particularly interested in what one of the alleged victims told Heintz in an interview published May 10. Some of the information Heintz attributed to her differed from what she told police, McArthur said. “From my perspective, that undermines her credibility,” McArthur said.

Heintz quoted the woman, who worked on McAllister’s Highgate farm and as his unofficial assistant in the Senate, as saying he started sexually assaulting her when she was 15 or 16, which would have been in 2010 or 2011. Police paraphrased the now-20-year-old woman in court papers offering a different timeframe, saying she started working for McAllister in 2013, when she would have been 18.

McArthur said that if he asks the woman during trial about the contradiction and she denies making those statements to Heintz, then, “We’re left with no recourse other than subpoenaing Paul Heintz.”

McArthur said that if Heintz simply stands by his story at trial, “I’d be perfectly happy with that. But he needs to say that.”

Davis wrote an article published October 14 based on an interview he conducted with McAllister at the senator’s Highgate farm. McArthur said that he’d also like to have the option to question Davis about that. McArthur said he is less interested in interrogating Roy, the news editor.

The Senate, meanwhile, is expected to vote in early January whether to suspend McAllister from the chamber. Senate leaders have suggested that can happen without extensive trial-like testimony about the charges against him, but McAllister said Wednesday a suspension vote will likely draw a legal challenge. Senate action should have no impact on the court case, Wheeler said, unless it turns into a full exploration of the charges against McAllister.