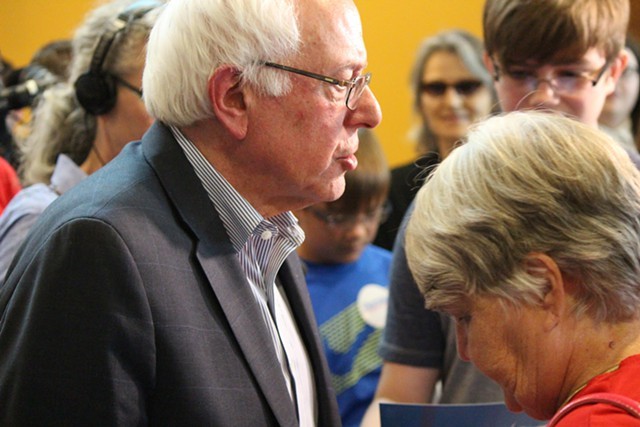 Later in the day, the Burlington-based progressive group Democracy for America did the same.

Both organizations made their decisions at the behest of members. While most labor unions leave it to their executive boards to dole out presidential endorsements, CWA president Chris Shelton said at a Washington, D.C., press conference Thursday morning that his union pledged from the start to abide by the results of a survey of its members.

"They voted decisively for Bernie Sanders," Shelton said. "This is absolutely a democratically come-to decision."

Similarly, DFA conducted a weeklong online poll that generated more than 271,000 votes. To win the organization's endorsement, a candidate had to win at least a two-thirds majority. In the end, Sanders took 87.9 percent, compared with 10.3 percent for former secretary of state Hillary Clinton and 1.1 percent for former Maryland governor Martin O'Malley.

Calling Sanders "an unyielding populist progressive," DFA executive director Charles Chamberlain said Thursday, "Throughout his campaign, Bernie has repeatedly said that the huge problems of income inequality, money in politics, and structural racism that our country must confront are bigger than a single campaign. They need a political revolution."

DFA grew out of former governor Howard Dean's 2004 presidential campaign. Dean himself has endorsed Clinton, as Sanders noted in a statement.

"It is no secret that the founder of DFA — my friend and fellow Vermonter former governor Howard Dean — has chosen not to support my candidacy," Sanders said. "Yet the leadership of DFA allowed a fair and free vote to take place which we won. That's pretty impressive."

Prior to winning support from the CWA, Sanders had only won endorsements from two, much smaller national unions: the American Postal Workers Union and National Nurses United. Sanders' top labor adviser is Larry Cohen, a former president of the CWA.

Sanders has been criticized in recent months for benefiting from campaign spending by the nurses' union's super PAC. The candidate himself has railed against the rise of super PACs. At Thursday's press conference, CWA's Shelton pledged to devote considerable financial resources to Sanders through its own super PAC and "do every single thing we can to get Bernie Sanders elected president of the United States."

Queried about the discrepancy, Sanders argued that comparisons between "working people knocking on doors" and "zillionaires" were "false."