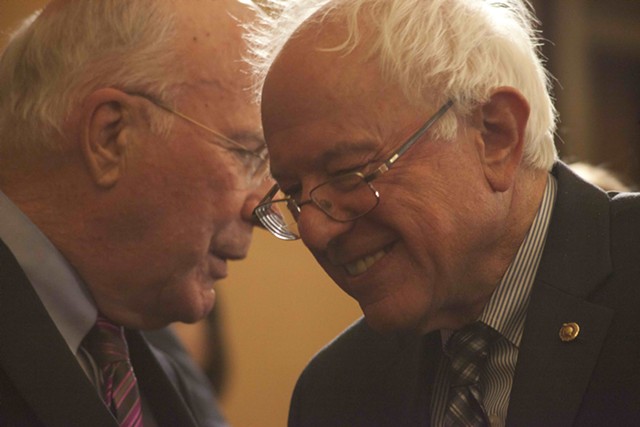 “I am appalled that some are espousing the hate-filled view that a country as great as ours should have a religious litmus test," Leahy said in a written statement, citing what he called a 235-year history of religious freedom in the U.S. "I am stunned that some, appealing to fear and intolerance, want to end this legacy and are launching direct assaults on these American values."

Echoing the sentiment was Leahy's junior colleague, who is seeking the Democratic presidential nomination.

“Demagogues throughout our history have attempted to divide us based on race, gender, sexual orientation or country of origin," Sanders said in a written statement. "Now, Trump and others want us to hate all Muslims. The United States is a great nation when we stand together. We are a weak nation when we allow racism and xenophobia to divide us.”

In a press release issued Monday afternoon, Trump's campaign said that the hotel magnate and reality TV show star was "calling for a total and complete shutdown of Muslims entering the United States until our country's representatives can figure out what is going on." The statement cited two studies — one of which was produced by an organization run by a man the Southern Poverty Law Center has identified as an anti-Muslim extremist — alleging that Muslims hate America and want to do the country harm.

"Without looking at the various polling data, it is obvious to anybody the hatred is beyond comprehension," Trump said in the release. "Where this hatred comes from and why we will have to determine. Until we are able to determine and understand this problem and the dangerous threat it poses, our country cannot be the victims of horrendous attacks by people that believe only in Jihad, and have no sense of reason or respect for human life."

Sanders emailed supporters of his presidential campaign late Monday night to further condemn Trump's remarks and ask for $3 donations, arguing that "poll after poll" shows that the Vermonter is "the candidate best suited to take on Donald Trump and every other Republican running for president."

At the same time, Sanders criticized the media for covering Trump's every word.

"It's fun for the political media to treat Donald Trump like he's the lead character in a soap opera or the star player on a baseball team," Sanders said. "But the truth is his language is dangerous, especially as it empowers his supporters to act out against Muslims, Latinos, and African Americans."