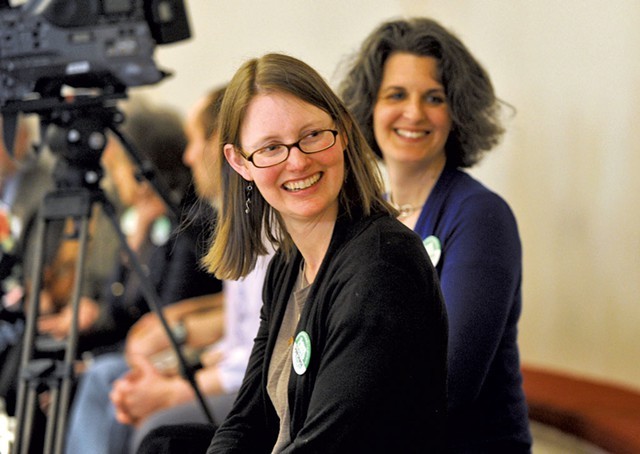 The leader of a statewide gun-control organization says she doesn't expect her group to fight for tougher gun laws during next year's legislative session, but she does expect to push the issue during Vermont's 2016 campaign season.

That could prompt the Vermont Federation of Sportsmen's Clubs, which supports gun rights, to make its first foray into electoral politics, according to vice president Evan Hughes.

"We're watching and observing what's going on with great interest," Hughes said of a burgeoning debate between Vermont's gubernatorial candidates about the state's gun laws. "The Federation has historically neither rated nor endorsed candidates. What happens in the 2016 election cycle remains to be seen."

Following last week's shooting at a Planned Parenthood facility in Colorado Springs, Democratic gubernatorial candidate Sue Minter and Republican candidate Bruce Lisman expressed support for requiring that those who buy firearms in private sales and at gun shows undergo the same background checks as do those buying such weapons at gun stores. Democratic candidate Matt Dunne and Republican candidate Phil Scott, the lieutenant governor, said they don't support such measures.

Minter, a former state representative and transportation secretary, has since doubled down on her position. In an op-ed her campaign released Thursday, she cited Wednesday's mass shooting in San Bernardino, Calif., which killed 14 people, as further evidence that Vermont should make background checks universal.

"I do not accept that gun violence is inevitable," Minter wrote. "As Vermonters, we should be part of the solution to this national crisis. To continue the same policies and assume something will change is the most dangerous form of denial. To do nothing is irresponsible."

On Friday, Dunne called the San Bernardino attacks and other recent mass shootings "horrific reminders of the gun violence problems we're facing in the country and in Vermont." He emphasized a willingness to discuss "any legislation that could reduce the amount of gun violence in our state and around the country."

Dunne made similar remarks Tuesday in an interview with Seven Days before the San Bernardino shootings. He said then that he supported a new state law prohibiting violent criminals from possessing firearms and requiring the state to report the names of those deemed mentally ill by a court to the federal database used in background checks.

But Dunne also made clear Tuesday that he did not believe the state should further strengthen its relatively lax gun laws. Asked specifically whether he supported universal background checks, the former state senator said, "I'm looking at this particular situation and [am] really disturbed that a likely act of terrorism took place against an organization like Planned Parenthood. The fact is that that kind of law wouldn't have prevented this situation."

Asked why he did not believe those buying guns in private sales should be subjected to the same background checks as those shopping at gun stores, Dunne said, "I'm focused on things that will actually address the issues we're confronting today." As for whether he would seek to ban semiautomatic weapons or high-capacity ammunition, Dunne said, "I'm open to exploring any proposal that is out there, but I don't see a need for new policies at this point."

Dunne was less forthcoming Friday. Asked repeatedly about his position on universal background checks — and whether his stance had shifted in the days since he last discussed the matter — Dunne would only repeat the same talking point: "I am open to a discussion of any legislation that could reduce the amount of gun violence in our state and around the country."

Despite her vocal support for universal background checks, Minter has been less clear about her stance on banning semiautomatic weapons or high-capacity ammunition. In an interview Tuesday, she declined to answer questions on the topic three times.

Asked again later in the week, after releasing her op-ed, Minter suggested she would not pursue such bans.

"The gun lobby would like the debate to be about what kind of guns law abiding Americans can own,” she said in a written response to Seven Days. “I believe our focus must be on keeping guns out of the hands of criminals and the dangerously ill. That is why I will fight for common sense steps like background checks."

Vermont politicians have reacted to the recent spate of mass shootings in markedly different ways.

Sen. Bernie Sanders (I-Vt.), who is seeking the presidency, called Thursday for sweeping gun-control legislation, saying, "The crisis of gun violence has reached epidemic levels in this country." Sanders' Democratic rivals have criticized the Vermonter on the campaign trail for his mixed record on gun legislation.

Gov. Peter Shumlin, a strong proponent of gun rights, told reporters Thursday that the recent shootings had not prompted him to rethink his opposition to new gun laws.

"No, it's convinced me that it's more and more important to have a 50-state solution, and the federal government ought to come up with one," he said, noting that certain assault weapons were prohibited in California. "If you have a ban in one state and you don't have one in the other, these crazies will get their weapons in the other."

"I think that is something that would have a meaningful impact, and it would save lives," the Democrat said. "It is supported by, from everything I can tell, certainly an overwhelming number of Burlingtonians and, I think, a very large majority of Vermonters, as well — including gun owners."

Last spring, the legislature declined to approve three charter changes proposed by Burlington voters in 2014. The measures would have allowed law enforcement officials to seize weapons from those accused of domestic abuse; ban guns in bars; and require firearms to be stored with locks. Weinberger said Friday that he would like the legislature to take up the charter changes when it reconvenes in January, but he would "rather see statewide action" on universal background checks "than us moving toward each community needing to do what it can on its own."

After a contentious debate over background checks last winter, the legislature ultimately approved only the more limited law addressing possession by violent felons and database reporting.

"I'm sure there are many people who feel like the legislature had the debate last year and it shouldn't come up for a while," Weinberger said. "I think the events that have taken place in the country oblige us to look at this issue again."

Braden, the Gun Sense Vermont president, is among those who think it's too soon to fight another battle in the Statehouse.

"No, we're focused on the upcoming elections," she said.

According to Braden, Gun Sense has yet to determine whether it will focus on the gubernatorial race, in addition to legislative elections — nor whether it would weigh in before the party primaries next August. She suggested that such a decision would depend on where the contenders ultimately come down on gun control.

"I think it's wonderful that candidates for statewide races are starting to stand up and take a stance in support of gun violence prevention," she said.