At Robust Rally, Phil Scott Calls for ‘Focus on Fundamentals’ | Off Message

At Robust Rally, Phil Scott Calls for ‘Focus on Fundamentals’

As Phil Scott kicked off his campaign for governor Tuesday, he delivered at least one clear message: He has a strong base of enthusiastic supporters.

The three-term Republican lieutenant governor, who races cars at Thunder Road as a hobby, showed he knows how to turn out a cheering crowd, which included both a who’s who of Vermont Republicans and a collection of those less accustomed to political rallies.

When Scott took the stage Tuesday evening at the Sheraton Hotel and Conference Center in South Burlington, a crowd of about 700 had gathered for a well-choreographed show, festooned with green and white balloons, a model race car and a toy excavator. It was, by far, the largest crowd any gubernatorial candidate has amassed this election season.

“A Scott administration will be focused on the fundamentals,” he said, emphasizing his blue-collar roots growing up in Elmore and Barre and as co-owner of an excavation company. “I believe Vermont needs a governor who listens instead of lectures.” 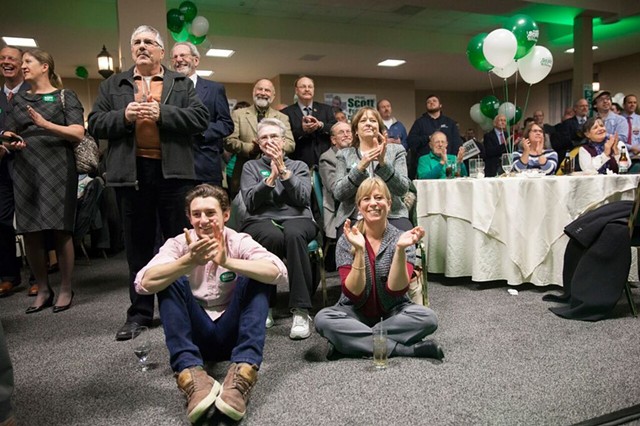 Whether Scott, 57, of Berlin can turn his personal popularity and his push for pragmatism into an election victory is something that will play out over the next year. A feisty 2016 gubernatorial campaign is already in play, with at least two Republicans and two Democrats seeking to replace retiring Democratic Gov. Peter Shumlin.

Scott faces retired Wall Street executive Bruce Lisman in a Republican primary. Democrats Sue Minter, a former legislator and Agency of Transportation secretary, and Matt Dunne, a former state senator and Google manager, are vying for the Democratic nomination. More candidates could enter the race, particularly after Democrat Shap Smith, the House speaker, last month discontinued his campaign after his wife was diagnosed with cancer.

On stage Tuesday, Scott did little to counteract critics’ complaints that he has taken few bold stances during his years in public office, including 10 as a state senator and the last five as lieutenant governor.

“While Scott has held elected office for 15 years, he’s failed to show much leadership or take a position on most issues,” Conor Casey, executive director of the Vermont Democratic Party, argued in a press release issued Tuesday.

Scott did take some political stands Tuesday, saying he would fight any state spending that grows faster than Vermonters’ wages. He also insisted the state ditch its troubled heath insurance exchange, an issue on which some Republicans accused him of being too weak two years ago.

“It’s long past time to pull the plug on Vermont Health Connect,” Scott said, drawing the strongest applause of the night. “What Gov. Shumlin called a ‘nothing-burger’ turned out to be a big McWhopper.”

Scott said after his speech he would offer more specific policy statements as the campaign progresses, but he and his supporters focused Tuesday on casting him simply as a leader Vermonters can trust.

“Unlike other politicians, Phil Scott isn’t going to promise us the sun, the moon and the stars, but he is going to bring us all together, focus us on our common goals and lead us in crafting solutions to our challenges,” Melissa Mazza Paquette told the crowd. She is the daughter of Sen. Dick Mazza, a Democrat and longtime friend of Scott’s, who also spoke on his behalf.

Former governor Jim Douglas, who retired in 2011, said of Scott, "“He reaches across the aisle to get good ideas passed and to resist bad ones.”

In a campaign video shown just before the candidate took the stage, Scott said he would bring to the governor’s office the strong values he learned from his parents. “Trust and integrity are very important. Vermonters are yearning for that again," he declared. "They want to trust their government.”

The video had all the makings of a future campaign TV commercial meant to introduce the candidate to voters. It detailed how Scott’s father, Howard, lost his legs during the D-Day invasion in World War II, overcame his injuries to live a relatively normal life, but died when Scott was 11.

On stage, Scott stood surrounded by his mother, Marian DuBois, daughters Rachael and Erica, and his wife, Diana. His 79-year-old mother, now a Florida resident, vouched for the middle of her three sons. “He has always been comfortable rolling up his sleeves and getting under the hood. Building and rebuilding things come naturally.”

Tuesday’s campaign kickoff came three months after Scott officially declared he would be a candidate for governor in 2016. The last of the declared candidates to hold a formal kickoff, Scott appeared to have put more time into planning a party that would pop.

Jason Gibbs, a former Douglas aide who is volunteering with Scott’s campaign, said the campaign’s organization goes far deeper than putting on a party. “It’s by far the most sophisticated field organization of any campaign I’ve worked on,” he said.

Scott attracted some supporters who’ve sat on the sidelines for recent Republican gubernatorial campaigns. One of them was Rutland Mayor Chris Louras, a former Republican state representative, who has shed party labels as mayor. Louras said he sat out the 2010 election in which Shumlin defeated Republican Brian Dubie to succeed Douglas. Then, Louras became a Shumlin supporter after the governor’s response to the 2011 Tropical Storm Irene.

“In this election, I am committed to supporting Phil Scott,” Louras said. “I believe he has the credibility, the experience and the ability to create collaborative partnerships that are necessary to overcome the state’s challenges.”