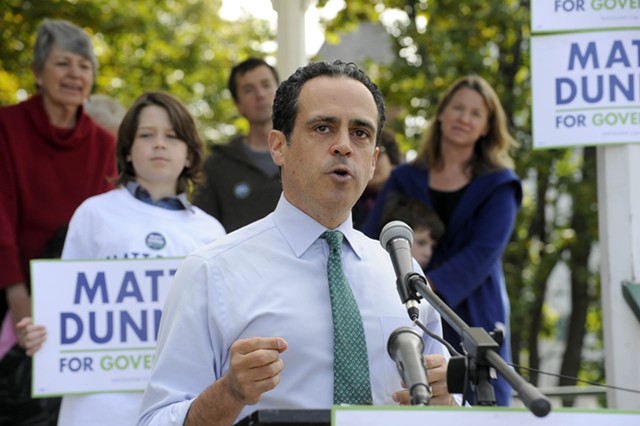 Following last week's terrorist attacks in Paris, two Republican candidates — Lt. Gov. Phil Scott and retired Wall Street banker Bruce Lisman — told Vermont Public Radio Tuesday that they would like to temporarily halt the resettlement of Syrian refugees in the United States. Authorities have blamed the Islamic State of Iraq and Syria for the attacks, which killed at least 129 people, but news accounts have indicated that most, if not all, of the suspects were French and Belgian nationals.

On Thursday, Democratic candidate Matt Dunne accused his Republican opponents of "playing to our worst fears."

"I have to say that when I heard Phil Scott's position on it, I was extremely disappointed," said Dunne, a community affairs director at Google and a former state senator. "I would have hoped that Phil would be someone who would not just fall in line with the right-wing Republicans in Congress."

Meanwhile, Scott appeared to walk back the tone, if not the substance, of his comments.

"When asked what I would do, I probably should have gone a little further to explain that I don't understand the situation and I certainly don't feel like we can pause or stop the refugee program in its entirety," he said. "But I do honestly feel the highest obligation of any government is to ensure the safety and security of every citizen."

Scott said he continued to believe that federal authorities should "pause and explain and verify to people what the security process is" before accepting more Syrian refugees. He explained that "pause" means "to stop, take a breath, explain the process and then resume."

When Seven Days pointed out that top White House, Department of Homeland Security and Federal Bureau of Investigation officials had briefed a bipartisan group of 34 governors on the refugee screening process Tuesday, Scott said, "I need to have faith in the process, too. I wasn't part of the briefing. Maybe they explained it."

To that end, the lieutenant governor said, he'd spoken briefly with Vermont Public Safety Commissioner Keith Flynn, who he said agreed to "get a couple of people together to explain it to me."

Scott said his "pause" policy should not apply solely to Syrians, but to "the refugee program in its entirety." He did not appear familiar with the extent of Syria's refugee crisis, estimating that "hundreds of thousands" had been displaced by the four-year-old civil war.

The United Nations High Commissioner for Refugees has registered nearly 4.3 million Syrian refugees outside their country, while the U.S. Agency for International Development has estimated that another 6.5 million are internally-displaced within Syria's borders. President Obama has committed to admitting at least 10,000 Syrians into the U.S. this year, but only 1,854 had been admitted by the end of September.

Dunne's tough talk mirrored that of Obama and Vermont Gov. Peter Shumlin, both of whom have eviscerated Republicans in recent days for questioning the refugee resettlement program.

"I think that these folks that are making comments like this are promoting fear, are promoting hatred, are promoting bigotry, at a time when we should be reaching out as Vermonters and saying, ‘How can we help?’ when folks are escaping from horrid, horrid circumstances,” Shumlin told the Vermont Press Bureau on Wednesday.

Dunne said Thursday that he "couldn't have been prouder to have been a Vermonter" after hearing Shumlin "standing up to fear-mongers to call for what is right and moral and just." 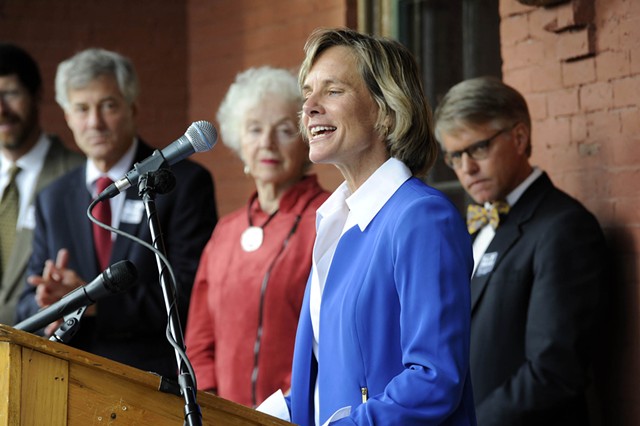 Former transportation secretary Sue Minter, who is competing with Dunne for the Democratic nomination, declined Thursday to comment directly on Scott's and Lisman's positions. But she said she personally opposed halting refugee resettlement.

"I certainly understand why Vermonters are concerned and are ambivalent, perhaps, about our role in accepting refugees fleeing from this crisis, but for me it is very much a matter of human rights. My position is that we should continue to do our part," she said. "Vermonters have always been a part of a tradition of being accepting in crisis — and that's who these refugees are."

Minter's own family served as hosts for a family of five Meshketian Turks who immigrated to the state in 2006 through the Vermont Refugee Resettlement Program. She said the experience gave her a "firsthand view of what it means to be without a home, without a community, without a country." Two members of that family remain in Vermont, Minter said, and "have become hardworking members of our community" and U.S. citizens "after a great deal of hard, hard work."

Lisman, Scott's rival for the Republican nomination, said Thursday that "it's very tempting to see these pictures and videos and say we've got to do something." But, like Scott, he thinks the U.S. should "take a step back" from admitting Syrian refugees, citing concerns raised by FBI Director James Comey, which related to Iraqi refugees, and by Congressman Peter King (R-N.Y.).

"Until we understand better the vetting process and get comfort from those people in positions to know — the FBI and all — we should take a pause in admitting Syrian refugees," Lisman said.

When Seven Days mentioned Tuesday's White House briefing, the candidate said, "Cut that out. Don't be facetious ... Listen, I wasn't on that call. I didn't read news reports about it."

Asked if his policy prescription applied to Iraqi refugees, he said, "It might." Asked if it applied to Afghanis, Libyans, Yemenis, Palestinians and others, he said, "I get the drift of your questions. It's possible to extend that to other places in the world, and that's not practical either. We are a nation of immigrants. On the matter of Syrian refugees, the stream is just so large and the situation is so chaotic, I think it's reasonable to ask for greater information."

Both Lisman and Scott distanced themselves from comments made by presidential candidates of their own party, including Sen. Ted Cruz (R-Texas) and former Florida governor Jeb Bush, who have suggested that Christian refugees be held to a different standard.

"That's not my point of view," Lisman said. "I don't think religion determines the value of a person."

Said Scott, "I don't think that that's who we are as a nation. The majority of us are descendants of immigrants. Some of our past generations settled here because they were fleeing persecution in their homelands. So we have to work this out."