Shap Smith Suspends His Bid for Governor | Off Message

House Speaker Shap Smith (D-Morristown) has suspended his campaign for governor, citing his wife's cancer as the reason.

"I am stepping away today because it is the right thing to do," Smith said during a 2 p.m. news conference. He added that it is unlikely he will resume his campaign. He did not endorse another candidate.

In a short, emotional statement, Smith explained that his wife, Melissa Volansky, had received her breast cancer diagnosis earlier in the fall and undergone surgery — which the family had hoped would be all the treatment required. Last week they learned that doctors advised additional treatment.

"We are optimistic that she will make a full recovery, but as so many Vermonters know, a diagnosis like this reshapes one's priorities," Smith said. "This is a time during which Melissa and the kids need me most."

A clutch of Smith's closest supporters watched with glum faces as he announced his withdrawal from the 2016 race.

"Sad, very sad," said Selene Hofer-Shall, a fundraising and operations consultant for his campaign. When asked who she might support in the gubernatorial race instead of Smith, she said, "That is a tomorrow problem."

"I still believe he would make the best governor," said Rep. Tony Klein (D-East Montpelier). He, too, had given no thought to an alternative, he said.

Smith said he wouldn't seek re-election to his House seat next year, but would complete his term as speaker this winter.

Rep. Sarah Copeland Hanzas (D-Bradford), the Democratic majority leader, said her caucus would step up to ease the burden on Smith during the upcoming session.

"The best that we will be able to do for them right now is to buckle down and make sure that we get prepared for a legislative session and prepared to take on some of the burden, so that he will have time to be home on weekends and not making a ton of phone calls to move legislation," Copeland Hanzas said. 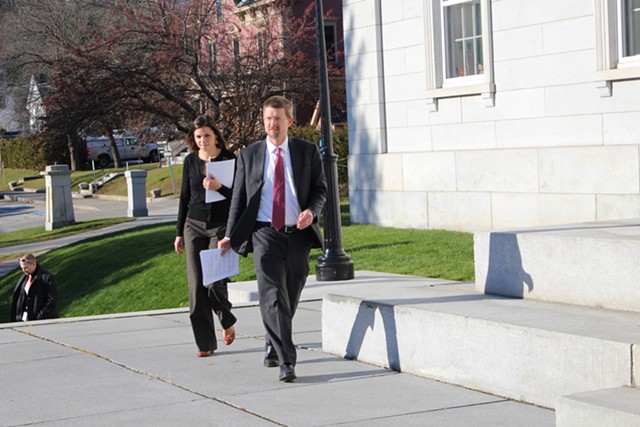 Smith's political career spans seven terms in the House. He has served as speaker since 2009.

Three-term Gov. Peter Shumlin, a fellow Democrat, announced in June he wouldn’t seek re-election, opening the door for politicians of all persuasions to consider a 2016 run.

Smith was the first Democrat to kick off a campaign for governor, gathering family and friends for his official announcement on August 19.

"Shap is a friend, who I admire greatly, and it is not surprising to me that he is putting his family ahead of all else," she said. "My thoughts are with Shap and Melissa."

Despite his years as speaker, Smith faced an uphill battle to introduce himself to Vermonters. He demonstrated keen political instincts first to win election as speaker and then during his years in that leadership position, coordinating passage of laws allowing same-sex marriage, approving a minimum wage increase and instituting reforms to create a path to single-payer health care. He also rallied lawmakers to override former governor Jim Douglas' 2009 budget veto.

As someone who played a key role in crafting state policies for the past seven years, Smith faced a challenge in differentiating his record from Shumlin's. He did, however, note at his kickoff, “I think anybody who has met us knows that we’re pretty different people.”

Smith's opponents in the Democratic gubernatorial primary also face challenges, which could have made it a tight, three-way contest. Dunne has run a statewide campaign before and already has a bulging war chest, but has been out of the public eye for six years. Minter has backing from former governor Madeleine Kunin, but also must introduce herself to most voters.

Smith’s campaigning to date had been confined to tweets, a few news releases, a couple of forums and, no doubt, much behind-the-scenes networking. He missed a November 3 forum that featured all the other gubernatorial candidates — the first public indication that his family took priority over politics.

A statement from the incumbent governor summed up how many supporters assessed the decision Smith made.