"Now is not the time for demagoguery and fear-mongering," he said at Cleveland State University's Wolstein Center. "If you think about it for a moment, you understand that what terrorism is about is trying to instill terror and fear into the hearts of people — and we will not let that happen. As Americans, we will not be terrorized. We will not live in fear." 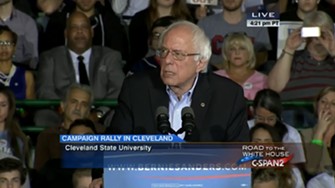 Sanders' comments came three days after alleged members of the Islamic State of Iraq and Syria carried out coordinated attacks in Paris that killed at least 132 people.

Since then, at least 25 Republican governors and one Democrat — New Hampshire Gov. Maggie Hassan — have said they would block Syrian refugees from resettling in their states, though it is unclear whether they have the authority to do so. On Monday morning, Vermont Gov. Peter Shumlin, a Democrat, said he would to welcome Syrians to the Green Mountains. Earlier this year, President Barack Obama pledged to resettle 10,000 Syrian refugees in the U.S.

At a Democratic presidential debate Saturday in Des Moines, Sanders declined to say how many refugees he would welcome to the country, saying he did not know what the "magic number" was. But he urged the country to "take its full responsibility in helping" those displaced by the civil war.

In Cleveland on Monday, the candidate for the Democratic presidential nomination said he was "disturbed" by what he had heard from Republicans about the matter.

"During these difficult times, as Americans we will not succumb to racism. We will not allow ourselves to be divided and succumb to Islamophobia," he said. "And when hundreds of thousands of people have lost everything — have nothing left but the shirts on their backs — we will not turn our backs on the refugees from Syria and Afghanistan."

Sanders reiterated his call for "an international coalition" to defeat ISIS, but he warned against plunging the U.S. into open-ended war. Referring to Republican claims that Obama appeared weak on the international stage, Sanders brought up former president George W. Bush's decision to invade Iraq in 2003.

"You remember President Bush," Sanders said to laughter. "We had a president, and he was very, very tough, but not very smart."