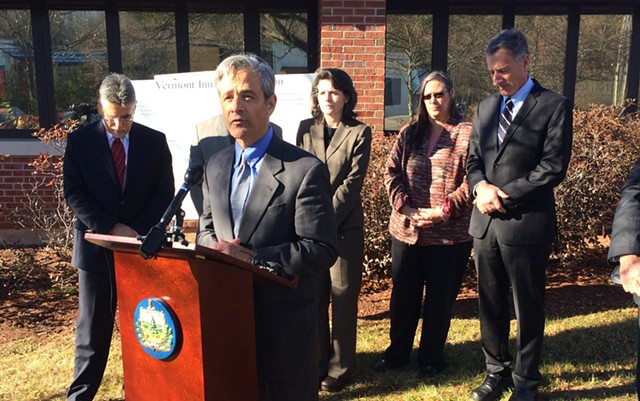 “The trend of rising incarceration has been reversed,” Shumlin said in a press conference outside the Chittenden Regional Correctional Facility in South Burlington. “That’s not only right for our hearts, it’s right for our pocketbooks and our heads.”

Shumlin, Attorney General Bill Sorrell and other officials credited programs that divert non-violent offenders from the court system into treatment programs, including a DUI Court in Windsor and the Rapid Intervention Community Court in Chittenden County. Shumlin said 800 defendants are enrolled in such programs.

The governor also touted laws that reduce inmate recidivism, decriminalize small amounts of marijuana and ban government agencies from asking job applicants about their criminal history. Shumlin said he would support similar legislation banning the practice by companies in the private sector in Vermont.

Vermont is down to 1,734 inmates, a level that was last reached in the early 2000s, and a reduction from around 2,100 inmates one year ago. It costs $62,000 a year to incarcerate someone in a Vermont prison.

Because the state lacks an adequate number of prison beds, most long-term inmates are sent to a prison in Baldwin, Mich., operated by GEO Inc, a private company with which the DOC has a two-year contract. Critics say the out-of-state program breaks bonds between inmates and their families and makes it difficult for Vermont officials to monitor the inmates' level of care.

While cheering the recent decline, officials acknowledge that the state has more work to do. Vermont had only 1,000 inmates in 1990 — the inmate population climbed until around 2004, then essentially held steady until the recent dip.  The increase in the number of prisoners came as the number of crimes committed in Vermont fell by roughly 30 percent in the same time frame — tougher sentences for drug and other crimes led to overflowing prisons.

Though Shumlin and officials from all political parties have declared that the state should try to avoid sending non-violent offenders to prison, about 25 percent of Vermont’s inmates are in custody for drug possession or property crimes. And there are around 150 inmates who remain in prison after serving their minimum sentences because the DOC has not approved their housing plan, DOC Commissioner Lisa Menard told Seven Days.

Defense attorneys have criticized the DOC for being overly stringent in criteria it applies to inmates’ housing plans.

Former DOC Commissioner Andy Pallito told Seven Days that the state should decriminalize all drugs if it wants to make larger cuts to its prison population.

Shumlin has refused to say whether he will support a legislative push to legalize marijuana. He told reporters he would make an announcement by the start of the legislative session in January.