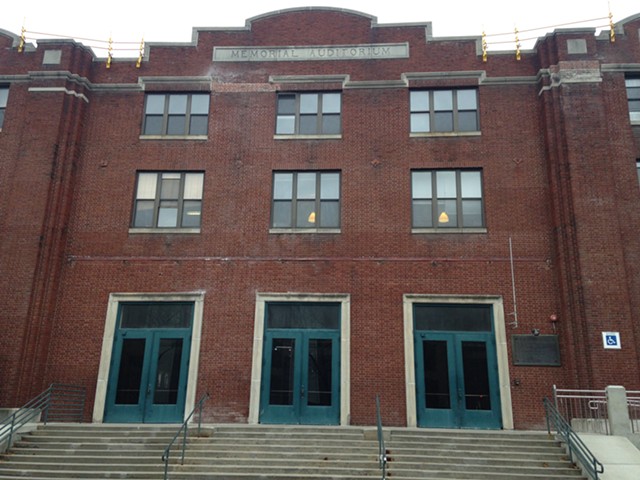 Expect the sound of silence at Burlington's Memorial Auditorium, at least for a while. No new concerts are being scheduled in the gymnasium of the creaky red brick structure on Main Street. That's due to concerns about handicap access to the balcony, the fire alarm system and major repairs that might be coming in the winter or spring, depending on what the city decides to do with the 1927 building.

“We're not booking the gym," Burlington Parks and Recreation director Jesse Bridges said Thursday, adding that the main reason for the decision is "so that we can wind down in order to make a decision about repair or reuse.”

The winter farmers market on Saturdays, Parks and Recreation basketball programs and other previously booked events will take place as scheduled, Bridges said. Events at 242 Main and the Burlington Generator space will also continue.

But the big auditorium space will be dark on First Night. Circus Smirkus, which normally performs in the auditorium during the city's big New Year's Even celebration, will perform in the Flynn Center this year. And it's unclear what the future will hold for the venue, where artists including Frank Zappa, K.D. Lang and B.B. King have performed.

Roof work is underway to prevent further destabilization of the building. That helped drive the decision to stop booking concerts in the 2,500-person capacity venue. The building could need more than $4 million in repairs just to keep up its current uses.

The fate of the structure, which loses about $200,000 a year in spite of bookings, has been under discussion for years. Mayor Miro Weinberger and the Burlington City Council are debating scenarios ranging from major upgrades to tear-down to sale of the property. The building, dedicated to Burlington's war dead, has hosted a range of events from classical music, to rock, to pro wrestling and the Chippendales male dancers.

Now it's time to figure out what's ahead for the auditorium, Bridges said.

"A lot of these capital needs have been identified for a long time and we can't just kick the decision down the road," he said. "We have to figure out what to do.”