A 21-year-old Burlington man who claimed to be a recruiter for the Ku Klux Klan was arrested Thursday and charged with leaving fliers that carried an "implicit threat of intimidation" at the homes of two women "of color," Chittenden County State's Attorney T.J. Donovan announced Thursday afternoon.

William D. Schenk, 21, who recently relocated from North Carolina, was arrested in Morrisville Thursday afternoon and was charged with two misdemeanor counts of disorderly conduct. The charges are considered hate crimes, which bring enhanced penalties — Schenk faces up to two years and 60 days on each charge.

"Oftentimes because of freedom of speech, people are allowed to discuss, rightfully, issues that make other people uncomfortable," Donovan said during a press conference. "This incident does not pass the freedom of speech test. It was a threat because of the history of the KKK, a history of violence and murder ... and hate." 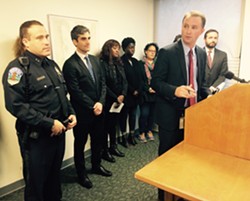 Schenk told investigators that he was on a recruiting mission and had distributed around 50 fliers, authorities said. But evidence suggests he distributed fliers to just two people, Burlington Police Chief Brandon del Pozo said. One of the women is African American, and the other identified herself as Mexican, according to court documents.

The fliers read, "Join the Klan and save our land."

Schenk initially cooperated with authorities before heading to Morrisville, where he was arrested by the U.S. Marshals Service. He is expected to be arraigned on Friday.

In an interview with police, Schenk said that he didn't "want no trouble," and was simply engaged in recruitment, according to police affidavits.

"It's just a nonviolent Christian organization," he told police, according to affidavits. "You know how there is an NAACP? The whites really don't have that. It's kind of like a Christian fraternal organization." Schenk said he had made similar recruitment efforts in North Carolina.

Schenk left a flier in a copier at the FedEx business center in Burlington, police said. A grainy security photograph from the store was released publicly. It prompted Schenk's former girlfriend — a Plattsburgh woman who had a restraining order against him— to call Burlington police and identify Schenk, police said.


Donovan acknowledged that the case, resting on the argument that the fliers carried an "implicit threat," will be legally tricky to prove.

Local activists have criticized the initial police response — a police dispatcher told the father of one of the women that the incidents were not a crime — and staged a rally outside City Hall last week in support of the victims.