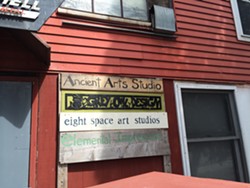 Burlington South End artists on Tuesday night again fought against an idea that they thought they had already killed off — allowing housing in the neighborhood's Enterprise Zone.

Bowing to concerns voiced by artists and other South End locals about gentrification, both Mayor Miro Weinberger and the entire Burlington City Council in recent weeks declared their opposition to allowing housing in the corridor.

But that didn’t stop the Planning Commission from continuing the debate on Tuesday night.

Commission members Emily Lee, Jennifer Wallace-Brodeur and Lee Buffington called the proposal, which would allow for studios where artists could both live and work, a “win-win.”

“The intent of this proposal is to narrowly focus on strengthening the arts district by increasing studio space and providing affordable housing units for artists,” they wrote in a memo. “It is not intended to introduce or revisit the broader issue of housing of all types or price points.”

The commissioners said their plan would allow the South End Enterprise Zone to potentially become home to something like the Old North End’s Rose Street Artists’ Co-op, which has 12 housing units for artists who meet income limits. That co-op, backers say, currently has a waiting list of people hoping to move in.

But by the end of Tuesday's meeting, after artists and other Planning Commissioners spoke in opposition, it was clear that the plan had little support.

Some South End artists said the plan to limit the housing units to artists would fail — after a few years, people who aren't artists would move in, they said. Critics also said artists had no interest in living in their studios. “Having residences in what is now an artist work area is not going to work,” said South End resident Charles Simpson. “It’s going to destroy it.”

Under heavy criticism from South End artists and others, Weinberger in September announced he was abandoning the idea of allowing housing in the Enterprise Zone.The City Council voted 10-0 in late October against future efforts to build housing in the burgeoning neighborhood.

“It’s an issue that’s not moving forward on a political level in the city at this point,” City Councilor Max Tracy (P-Ward 2) told commissioners last night.

But Wallace-Brodeur said it would be shortsighted for the commission, an independent body, to give up on any possibility of allowing more housing in the growing neighborhood.

“It’s really important for us to act as an independent policy making body … and look at the big picture of what we want to happen in this district,” Wallace-Brodeur said. “By saying, 'Housing can never be considered,' we're being shortsighted and taking an essential tool out of the toolbox.”

But it was clear the idea did not have enough support on the seven-member commission and it appears, once again, dead.

“I see this as tone deaf,” Planning Commission chair Yves Bradley said. "We’ve heard very loudly and clearly from people we are trying to help that they don’t want this. It’s a very clear message."