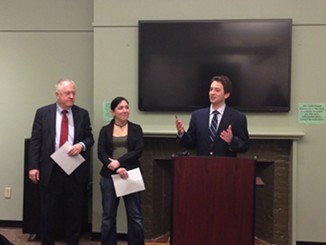 Barely an hour after Sen. David Zuckerman (P/D-Chittenden) disclosed Tuesday that he's leaving the Vermont Senate to run for lieutenant governor, another politico volunteered for his old job.

David Scherr, a 33-year-old former chair of the Chittenden County Democratic Party, emailed friends and supporters to say that he would run for Senate in 2016.

The Burlington attorney, who specializes in juvenile, family and criminal law, says his work defending those struggling to get by has inspired him to seek public office.

"I'm running because I'm a lifelong Vermonter, and I work every day on behalf of low-income folks in the state," he says. "It's an honor and a privilege to work with people on a case-by-case basis, but in doing that I've seen issues common to many cases, and I realize there are real policy issues we need to address on a broader scale."

The Norwich native attended Amherst College and Columbia Law School. He recently concluded a two-year stint as chair of the county party and previously served nearly two years as chair of the Burlington Democratic Party.

Scherr plans to seek the Democratic nomination to join Chittenden County's six-member delegation. In addition to Zuckerman, the district is currently represented by Democratic Sens. Phil Baruth, Ginny Lyons, Michael Sirotkin; Democrat/Progressive Tim Ashe; and Republican Diane Snelling. None of the other incumbents have announced their plans for 2016, though Baruth has said he, too, is eying the LG race.