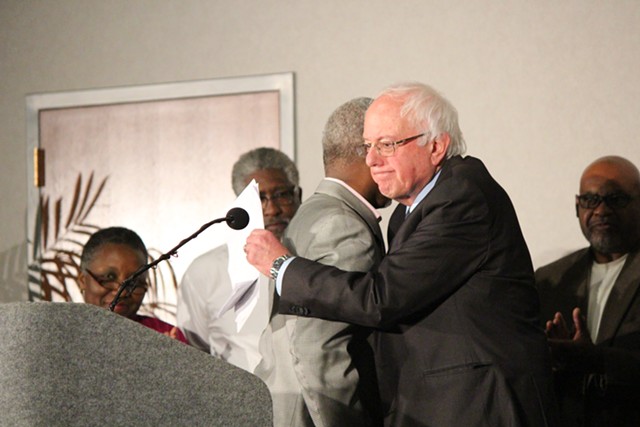 Speaking at the Columbia Conference Center, state Rep. Terry Alexander (D-Florence) hailed Sanders' participation in the civil rights movement and said the candidate had "fought for the African American community" throughout his political career.

"I'm here because it is clear to me — it is clear to me — that Sen. Sanders is the strongest candidate here for African Americans," Alexander said. "And he will bring about change, not only in the African American community, but he will bring about change in this country that the least of these will have the same opportunity as those 1 percent at the top."

Like Alexander, most of those who stood with Sanders at Saturday's press conference were black. The message was clear: Just because the independent Vermonter represents a state in which 19 out of 20 residents are white does not mean he's incapable of representing the black community.

Joining Alexander behind the podium were 16 other members of Sanders' new "South Carolina Leadership Team." In total, that team consists of 28 people, according to his campaign, including three state legislators, five South Carolina Democratic Party officials, a mayor, a police chief and several student activists. Whether Sanders can speak to a broader audience than that which joined him at the Columbia Conference Center remains to be seen. A Winthrop Poll released last week found that just 8 percent of black South Carolinians support Sanders, while 80 percent back former secretary of state Hillary Clinton. Including voters of all races, Sanders trailed Clinton 15 percent to 71 percent.

"Bernie's doing as good a job, I guess, as you can in introducing himself to African American voters, who make up more than half the Democratic electorate," Winthrop professor Scott Huffmon, who conducted the poll, said Thursday. "But this shows he still has a ways to go."

South Carolina is the fourth state in the Democratic presidential-nominating contest — following Iowa, New Hampshire and Nevada — and it's the first with a sizable black population. If Sanders underperforms in the Palmetto State, Clinton's campaign will surely argue that his appeal is limited to white liberals.

Sanders himself acknowledged the challenge Saturday, though he said he believed he had "an excellent chance to do well in South Carolina."

"I think we’ve got a ways to go. I think we start as an underdog," he said. "But with a team like this — with the issues that we’re talking about — I think we’re going to resonate with people throughout this state, and we’re going to surprise a lot of folks on Election Day.”

Sanders focused his remarks on his support for criminal justice reform, free higher education and, especially, protecting the right to vote.

"This I pledge: If elected president of the United States of America, we're not going to continue a situation where Republican governors and legislatures are making it harder and harder for people to participate in the political process," he said, referring to recent initiatives in South Carolina and elsewhere to erect barriers to voting.

"And let me be very clear — as clear as I can be — that people who are afraid of free and fair elections, who are working overtime to deny the right of people to vote, just because those people may vote against them, are political cowards," he said, reprising a line he deployed Friday night during an MSNBC candidates forum. "If you are afraid to run in a free and fair election — if you believe that your ideas can't win, then get another job and don't participate in politics."

Gloria Bromell Tinubu, a two-time Democratic congressional nominee, said she believed that message would resonate with her neighbors.

“I stand with him, and I believe that South Carolina will lead this nation by supporting Bernie in February so that we can really form a more perfect union," she said. “I believe that with you in the White House we will see better days to come.”