Lawmakers Ponder How, Not Whether, to Legalize Marijuana | Off Message

Lawmakers Ponder How, Not Whether, to Legalize Marijuana 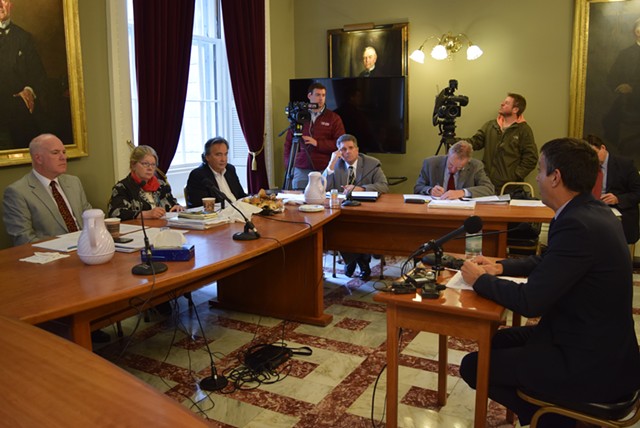 If Vermont legalizes marijuana, the state can expect consumer demand for about 50,000 pounds a year, an advocate for legalization told a panel of state senators Tuesday. It should also be prepared to permit domestic, craft, mid-sized and industrial growers to meet that demand.

“We see ways to create jobs — good long-term jobs that won’t go away after an initial boom,” said the advocate, Bill Lofy, a former chief of staff to Gov. Peter Shumlin who is now supporting the Vermont Cannabis Collaborative. The organization plans to issue detailed recommendations this month on how to create a Vermont marijuana industry akin to the state's craft beer industry.

But beware, Lofy said: Banking is complicated for companies growing and selling a product still illegal under federal law.

“There’s a myriad of banking issues,” added Joe Veldon of Morrisville, who described himself as a marijuana consultant for a dozen growers, three dispensaries and an extract company in western states that have legalized marijuana. “We haven’t been able to fix that.”

As the Senate Committee on Government Operations continued Tuesday to ponder what legalization should look like, members heard a slew of ideas, some concurring, some conflicting. The committee’s goal is to sort through all the ideas and cautionary tales and turn them into a bill at a Nov. 19 meeting, said committee chair Jeanette White (D-Windham).

Tuesday’s session at the Statehouse had a random feel to it, with testimony coming from whoever happened to tug on White’s shirtsleeve and ask to be heard. The diversity of those looking to grab legislators' attention showed how much money is at stake in creating a new industry.

Take Lofy, who has years of political experience in the governor's office, at the Democratic Governors Association and at the Democratic Senatorial Campaign Committee. Though he called himself "a voluntary member" of the cannabis collaborative's steering committee, he later clarified that he was paid a stipend to prepare its report. Lofy registered as a lobbyist with the Secretary of State's office on Sunday, he said, "out of an abundance of caution."

And then there's Veldon, who said his career as a marijuana consultant evolved because, "I developed a strain of pot that's known nationally."

There was one group of people White wasn’t inviting to sit before the microphone Tuesday. She explained: “I don’t want to hear from people who say we shouldn’t do this. The conversation of whether this should or shouldn’t pass will be in the [Senate] Judiciary Committee. We’re not answering should we or shouldn’t we.”

Nonetheless, the bill White’s committee produces Nov. 19 will assume Vermont should legalize marijuana, a position she and the majority of the committee support. It is expected to outline what kinds of marijuana growing and retail operations Vermont will allow. That includes such thorny details as how many permits the state should issue, at what cost and to whom; how much marijuana various growers should be allowed to produce and sell; whether that amount will be measured by plot size or number of plants; and whether marijuana lounges and edible products will be allowed. There is almost no end to the details to consider. 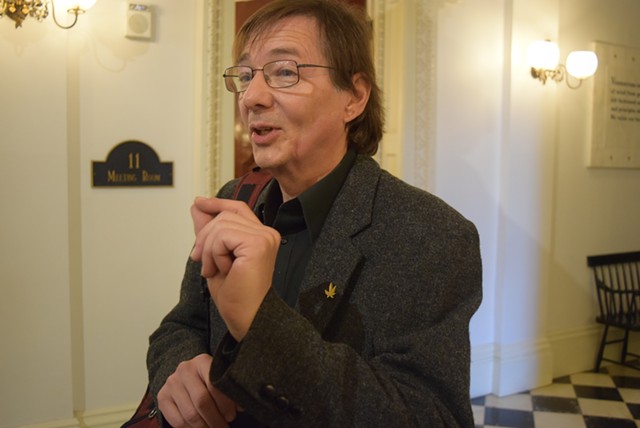 The bill the committee comes up with is expected to go to the Judiciary Committee for further consideration in the early days of the legislative session in January. “The majority of the conversation will be in Judiciary,” White said.

That doesn’t mean easy passage for legalizing marijuana in 2016, as the legislation would have to pass both the House and Senate. But Sen. Joe Benning (R-Caledonia), a supporter of legalization and a member of both Senate committees that will consider the issue, said on Tuesday that passage is plausible.

“The governor, having said he’s in favor, has my Judiciary Committee chair — Sen. Dick Sears (D-Bennington) — going from somebody who was adamantly opposed to somebody willing to consider it," Benning said. "That’s a big step."

Benning's characterization of the governor's position is not entirely accurate. While Shumlin has said he supports legalization, generally speaking, he reaffirmed at a press conference last Thursday that he still does not know whether he'll back it next legislative session. Lofy, who said he's spoken with Shumlin "briefly" about the subject "four or five times," expressed confidence his boss would get to yes. "I think he will be supportive of legalization, but I would imagine, for him, like everything else, it will depend on what kind of legalization we're talking about," Lofy said.

Legalization won’t come without a fight. The Vermont Medical Society plans to join other groups, including Vermont police agencies, municipal leaders and school counselors, in opposing the legislation for health and safety reasons.

Some senators said they also remain skeptical. Sen. Chris Bray (D-Addison), a member of White's committee, said health concerns are high on his list of reasons why he wants to "know more.”

White conceded Tuesday that if legalization legislation passes, it’s unlikely to be perfect.  “Is it better to pass a flawed bill that will evolve over time than to pass nothing?” she asked one witness. Later, she answered her own question. “In my opinion, yes, flawed is better than none.”