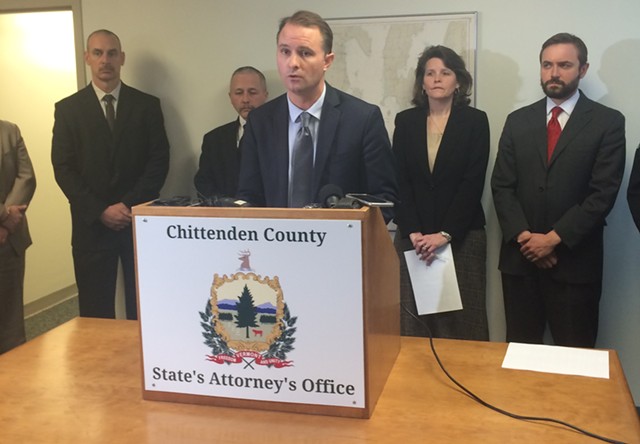 Updated at 6:49 p.m. to include a statement from the Burlington Police Department.

“It’s clear that criminal charges … are not supported,” Donovan said during a press conference. Attorney General Bill Sorrell also cleared the officers of wrongdoing on Monday.

Volp and LaBarge turned off their body cameras prior to the shooting, fearing that the red light that indicates the cameras are activated would give away their location, Donovan said.

But Vermont Public Radio's Taylor Dobbs reported that the officers could have simply turned off the light without shutting down the camera. The camera's instruction manual has a section entitled “Turning off the Camera LEDs,” which explains, "for some situations, you may wish to turn off the lights on your camera.”

In response to the VPR story, Donovan told the radio station that he would review the statements that Volp and LaBarge gave to Vermont State Police about the shooting to see if they were "inaccurate."

Burlington police said they would cooperate with that inquiry.

"The investigation into the recent Colchester police-involved shooting shows that the department’s eagerness to field body cameras for the sake of increased accountability outpaced officers’ knowledge about how to use them and the creation of comprehensive policies and training for their deployment," Deputy Police Chief Bruce Bovat said in a prepared statement. "These deficiencies will be remedied in the coming weeks. The state's attorney’s concern that certain members of the department may have given the state police investigators inaccurate information about the capabilities of the camera deserves further review. The department will fully cooperate with any investigation aimed at clarifying what was relayed to investigators and why."

At least six police cameras, including body cameras and cruiser cameras, were at the scene, but none captured the shooting, authorities said.

Ben Luna, an attorney who said he is representing Hemingway in a possible lawsuit against police, said Hemingway disagrees with the officers' version of events. “It’s unfortunate that the most compelling evidence that would have been in existence [isn’t],” Luna told reporters after Donovan’s press conference. “What my client advises happened that night is dramatically different than what was said [by police.] My client had clearly surrendered.”

Hemingway, who suffered wounds to his abdomen and foot, is scheduled to appear in Chittenden Superior Court on Tuesday to answer to charges of disorderly conduct and two counts of simple assault on a police officer.

Police did not call mental health crisis counselors to the scene because of safety concerns.

Volp and LaBarge, who have been on paid leave since the incident, will soon return to active duty, said Bruce Bovat, deputy police chief in Burlington.

Around 3:15 a.m. on September 20, Christina Nolan called Colchester police and asked them to check on her nephew, Hemingway, who had sent her a picture with a rope around his neck and said he was going to hang himself. Colchester police officer Victor Bitca was the first to arrive at Hemingay’s mobile home on Hawthorne Lane. The area was dark. Hemingway told Bitca to go away.

At several points, Hemingway called 911, saying that the police should leave or he would hurt them. “Going to be a long fucking night, somebody is going to end up getting shot,” he said, according to authorities. “Leave me the fuck alone.”

Hemingway became increasingly agitated in follow-up calls he placed to 911. He also yelled that he could see Bitca and threatened “I will shoot, I will shoot you.” Officers looking through a window saw Hemingway holding a rifle.

Officer Krystal Wrinn, a trained hostage negotiator, called Hemingway. He told her that he had recently broken up with his girlfriend and was worried about being arrested because he was underage and had been drinking.

LaBarge, Martin and Winn turned off their body cameras, which Burlington police deployed last year and touted as a tool to increase transparency. LaBarge and Martin were concerned that their cameras' red light would give them away. Winn worried that a beeping noise the cameras sometimes emit would distract Hemingway during their phone conversations, according to the report.

Around 5:30 a.m., Hemingway walked outside with a rifle and began pacing in his driveway, the report said. He made sweeping motions with his rifle, and nearby officers, hiding in the darkness, drew their weapons. He then started walking down Hawthorne Lane. Officers momentarily lost sight of him in the darkness.

Eventually, Hemingway hopped into his car while holding his rifle, and began driving. “You guys are not coming to get me … I don’t want a DWI, but I am going to drive away,” he said, according to Donovan’s report.

Volp fired three shots at Hemingway inside the car, fearing he was heading to the police command post. Hemingway then got out of the car and began walking towards Volp and LaBarge. It was unclear if Hemingway was wounded at that point.

The officers yelled for Hemingway to show his hands, but he kept walking toward them and reached into his waistband, where officers said saw a metallic object they believed to be a gun.

Both officers opened fire. Hemingway fell to the ground and the officers handcuffed him and administered first aid. Hemingway was taken to the University of Vermont Medical Center.

Officers found an air rifle in Hemingway's car. The metallic object in his pants turned out to be salad tongs.

Bovat said the department has reported its concerns to the cameras' manufacturer, and has not determined how they will use them in future incidents.