Sanders Picks Up Labor Support During Two-Day Trip to N.H. | Off Message

Sanders Picks Up Labor Support During Two-Day Trip to N.H. 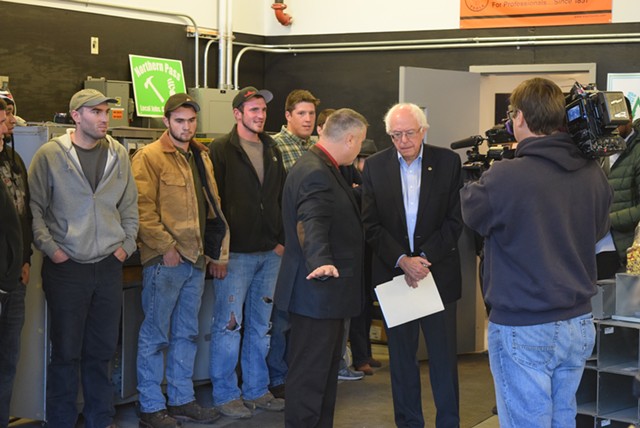 The unions that offered their backing Saturday have known Sanders for decades as a dyed-in-the-wool labor supporter who has frequently crossed the Connecticut River to attend their meetings.

“For us, it really was a no-brainer,” said Janice Kelble, as she offered the support of the American Postal Workers Union in New Hampshire during a morning press conference.

Kelble made the remarks outside the International Brotherhood of Electrical Workers Local 490 headquarters in Concord. She was surrounded by about 50 members of the local postal workers union, the IBEW chapter and Hanover's Service Employees International Union Local 560, all of which announced their support for Sanders.

“I don’t see how any union in the state of New Hampshire would not want him,” said Maynard, a journeyman wire mechanic.

Labor unions have been a key part of Sanders’ political base throughout his two-and-a-half decades representing Vermont in Congress. But locking down their endorsements as he competes for the Democratic presidential nomination against Hillary Clinton has proved tougher.

The only national labor organization Sanders has snared is the National Nurses United, which endorsed him in August. But on October 23, rival Clinton beat Sanders out for the highly sought backing of the American Federation of State, County and Municipal Employees, the nation’s largest public sector trade union.

Clinton also sealed up the support of the International Association of Machinists and Aerospace Workers in August and the American Federation of Teachers in July.

Sanders' New Hampshire labor announcement brought out a pickup-driving, gun-enthusiast audience that stood in contrast to the college students and senior citizens who have packed many of his events.

Sanders went out on a limb Saturday and asked those behind him if they owned guns (many nodded yes) and if they objected to his call for strengthening instant background checks on gun purchases and banning the sale of certain military-style weapons (they indicated they didn't).

The Vermont senator used the event as an opportunity to emphasize his longstanding pro-labor stances, including opposition to foreign trade agreements he says have prompted U.S. companies to move manufacturing overseas.

“We need a trade policy which does not result in corporations shutting down plants in New Hampshire and Vermont and all over this country moving to China,” Sanders told the union members.

Taking questions from an array of national and local reporters at the press conference, Sanders relied on another of his long-standing views — his opposition to the war in Iraq — when asked about the escalating crisis in Syria. President Barack Obama announced Friday that he would deploy a small contingent of special forces to the war-torn country.

“I voted against the war in Iraq because I feared very much a perpetual war,” Sanders said. In the case of Syria, he said, he would demand as president that a coalition of nations get “much more active” in working together to fight terrorism.

How would that differ from Obama’s approach? Sanders was less clear about that.

Friday in a press release, Sanders spokesman Michael Briggs said the senator “expressed concern” about Obama’s decision to send special forces. Asked to clarify what he meant Saturday, Sanders said, “I haven’t examined the proposal in entirety,” but he said when he hears about sending U.S. troops, “I get nervous.”

“My nightmare is the U.S. once again gets caught in a quagmire that never ends,” Sanders said. “I do not want to go to more funerals.”