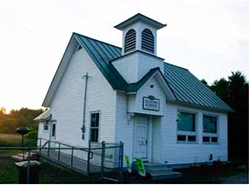 Votes next Tuesday on two school mergers could amount to a referendum on how far Vermonters will go in holding on to school choice.

Voters in Essex, Essex Junction and Westford will decide whether to merge their three districts into one. Morrisville and Elmore residents will vote on merging their two districts.

In each case, one of the towns would have to give up the long–standing tradition of paying tuition to send children to any non-religious high school they choose. Voters will decide if potential tax savings outweigh their desire to retain that option.

Their decisions could offer an indication of how the school choice issue will play out in other Vermont towns. A new state law requiring all school districts to consider consolidation has sown confusion over whether towns that lack their own schools must give up the choice option if they pair with towns that have their own schools.

The proposed Essex-Essex Junction-Westford merger is the first in Vermont to go to a vote under the state’s new school-consolidation law, Act 46, which offers new tax incentives to districts that act quickly. The Morristown-Elmore plan predates the law's passage.

“It was kind of a bonus,” Westford school board member Martha Heath said of the incentives, which were enacted last spring as the three communities were already looking to merge.

If residents of all three districts approve the plan, they would get gradually diminishing tax breaks over five years, starting at 10 cents per $100 of assessed value. If only Essex and Essex Junction approve the merger, they’d get tax breaks over four years. A merger committee estimated that the merged district would also save $1 million a year after three years, mostly through administrative consolidation. It would take effect in July 2017.

To get those savings, Westford residents would have to give up school choice, from which they benefit because the town lacks its own high school. Under the merger, they would become part of a district that operates Essex High School, making that their designated high school and giving them a voice for the first time in the high-school budget. That change could be tough for some to swallow.

Seventy percent of Westford high schoolers already choose to go to Essex High School, according to Heath. Students for whom the town currently pays tuition to attend other high schools would be able to continue to do so through 2020, but future students would not have that option.

The other merger vote — in Morristown and Elmore — offers a similar dilemma for Elmore, whose residents would have to give up school choice for grades 7-12 and fear the eventual closure of their tiny one-room schoolhouse, in which grades 1-3 are taught by a single teacher. Elmore students already go to Morristown for kindergarten and grades 4-6, but if the merger is approved, Morristown's Peoples Academy would also be their designated middle and high school.

The Morristown-Elmore merger predates Act 46, so it does not offer the same specific tax breaks. But it would save Elmore residents an estimated $650,000, according to Stuart Weppler, co-chair of the merger study committee and an Elmore school board member. The district would receive a $150,000 state merger grant.

Weppler said the vote essentially comes down to choosing a “major tax advantage,” versus keeping school choice. Of Elmore’s 130 high school students, only 15 now opt to attend schools other than Peoples Academy, he said.

“The school board is saying, ‘If you’re looking for tax savings, that’s what you have to give up,'” Weppler said.

According to Weppler, the merger agreement guarantees the Elmore school would stay open for at least four years, the longest period allowed for such a guarantee under state law. After that, any decisions about school closures would be up to a new seven-member board, whose membership is also up for a vote Tuesday.

Essex, Essex Junction and Westford will also be voting Tuesday on a 10-member board, which would oversee the merged district, if it’s approved. The three Chittenden County communities have weighed in on this question before, voting down a 2007 merger proposal.

“I think that residents are more inclined now than any other time in the past to create a unified school district. Since the last time we considered this question, the environment has changed dramatically,” said merger study committee chair Brendan Kinney. “Residents are concerned about the tension between rising property tax rates and the quality of education that we expect for our students.”

Heath also noted the enhanced tax incentives and the fact that the new law allows the state to eventually force unwilling districts to consolidate.

“This is a way to control our own destiny,” she said.

Corrected November 1, 2015, to reflect the Essex merger committee's expectation that it would save $1 million annually after three years.