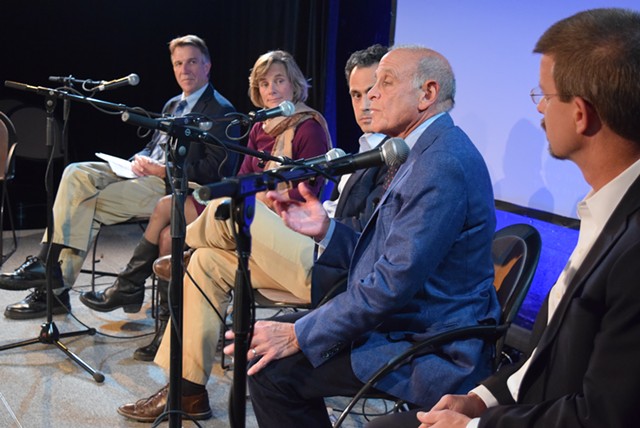 Vermont has many examples of homegrown entrepreneurial businesses. The five candidates for governor had no trouble reeling them off one after the other Monday night as each candidate tried to prove he or she was the right person to foster more of them.

What would they do to help launch the next Ben & Jerry's? The three Democrats and two Republicans tried to persuade an audience of about 100 at the Flynn Center in Burlington that they have the answers. Each was a little nervous and a little brash while ushering in the start of what promises to be a long campaign for the open seat.

More than a year before an election in which Vermonters will choose a new governor, this marked the first time all five declared candidates shared the stage for a campaign forum. The occasion was Gov Pitch 2016, an event sponsored by FreshTracks Capital and the United Way of Chittenden County.

Candidates were tackling many of the same issues that have challenged their predecessor, retiring Democratic Gov. Peter Shumlin: how to keep young graduates in the state; how to ensure everybody who needs it has high-speed internet; how to train workers for the jobs in demand; and the most effective incentives to attract businesses.

Matt Dunne, a Democratic former state senator and Google manager, called for creating a Green Mountain Innovation House where entrepreneurs could live and work while collaborating with area colleges.

Dunne said his professional experience lays the groundwork for extending broadband internet “to the last mile,” allowing anybody who wants to be innovative to do so in their barn or garage.

He argued the governor’s race will come down to “who can deliver on the promise of reinventing the economy of the state Vermont."

Bruce Lisman, a Republican and former Wall Street executive, said that current state officials “don’t know our employers at all.” A business owner's choice of where to locate can make or break a community, he said, noting that Bill Gates chose Seattle over Albuquerque as Microsoft's home, “forever finishing Albuquerque and changing the direction Seattle would take."

“Maybe the focus should be on retaining the business we have,” Lisman said, when asked what he would do to help businesses outside Chittenden County. He accused state officials of doing too little: “I fear the state is on the heels of its feet.”

“It wasn’t just the beer, it was the community,” she said. Should she be elected governor, she said, “If you have a good idea, we are a place that will embrace and run with it. We can be home to the next big idea. I’m a governor that will have an open door and an open mind.”

He argued that Democrats currently in charge of state government and the legislature have created an unpredictable landscape for business. As they discussed single-payer health care, Scott said, "The duration of the debate went on far too long."

Scott argued, “We seem to have a deficit of faith in our government." That, he said, calls for "strong, courageous leadership to build consensus."

Shap Smith, a Democrat who serves as House speaker, said he would create an entrepreneurial council that would have direct access to the governor “to tell us what’s good, what’s bad.”

Smith called for putting bond money into expanding broadband to unreached areas, as the government did to extend electrical lines.

He said companies should be partnering with tech centers to teach students skills for jobs that companies are having trouble filling.