Burlington City Council: Hold Off on Housing in Enterprise Zone | Off Message

Burlington City Council: Hold Off on Housing in Enterprise Zone 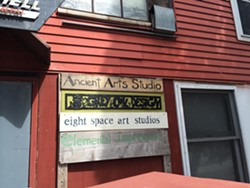 The Burlington City Council made it clear Monday night that it will oppose putting housing in the South End’s Enterprise Zone — at least for now.

A group of artists and small-business owners fought back forcefully against the proposal, arguing that housing would make artist studios and commercial space unaffordable, and new residents would prove incompatible with nearby businesses.

“It has been loud and it has been constant,” said Democratic Councilor Chip Mason, of the dissent. Mason represents Ward 5, which includes the area under debate.

Although the vote was unanimous, the council didn’t offer wholehearted support for the opponents’ argument per se. The resolution it passed said nothing about housing being a bad idea. Instead, it made the case that “opposition has diverted attention from the broader discussion of the future of the South End.” Mayor Miro Weinberger offered a similar explanation when he announced last month that he’d be withholding support for the proposal.

“It has become a distraction,” reiterated Councilor Joan Shannon, a Democrat who represents the South District covering the South End, who was the only other councilor to speak on the resolution. However, arguing that “housing has a tendency to take over all other uses,” she made it clear that she is against the idea.

Mason took a slightly different tack, acknowledging, “Any place we propose putting housing there are objections.” He also pointed out that two weeks earlier, the council passed a housing action plan, pledging to encourage more housing in order to reduce costs for constituents.