At Campaign Kickoff, Kesha Ram Says She's No 'Kitten With Lipstick' | Off Message

Seven years ago, a 22-year-old California native named Kesha Ram sought a seat in the Vermont House just months after graduating from the University of Vermont.

"Right out of the gate, I was underestimated," Ram said Monday evening, speaking to supporters at Burlington's Main Street Landing. "I was called a kitten with lipstick. And I, a young woman fresh out of college, was asked: What could I possibly bring to the table?"

Evidently, some political skills. In a hotly contested race in Burlington's Old North End, the Democratic novice defeated Progressive incumbent Chris Pearson, becoming the youngest member of the legislature in 2009. (Ram didn’t identify the author of the “kitten” comment in her speech, but she later said it was an anonymous commenter on a news website.)

"We showed our opponents that this kitten with lipstick could win a House seat," Ram said as she prepared to launch her next big political campaign. "Now, as I travel around the state and stand before you, I am humbled and honored to announce my candidacy to be Vermont's next lieutenant governor."

Ram, who revealed two weeks ago that she'd seek the state's No. 2 job, was the first in the race to hold a formal campaign kickoff. Marlboro Democrat Brandon Riker has been campaigning for the post since last spring, while former state auditor and senator Randy Brock, a Swanton Republican, jumped into the race early this month. Others, such as Sen. Phil Baruth (D-Chittenden), Sen. David Zuckerman (P/D-Chittenden) and Sen. Joe Benning (R-Caledonia), are also considering running. 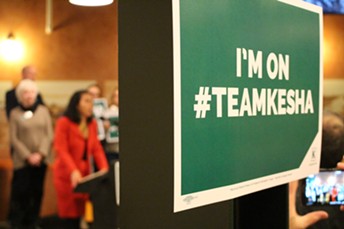 Though the field remains unsettled, Ram turned out a formidable crowd of politicos, including former governor Madeleine Kunin, two gubernatorial candidates and many of her fellow House Democrats. Her campaign manager, Brandon Batham, handed out sheets of paper trumpeting nearly 65 endorsements. Supporters held signs that read, "I'm on #TeamKesha."

Though he might not be an active user of the hashtag, Rep. Bill Botzow (D-Pownal), a 70-year-old legislator from Bennington County, cited Ram's relative youth as a key attribute as he introduced her.

"How many people are millennials or on the cusp of millennial in this room?" he asked the crowd.

"Great," he said, after several people raised their hands. "If you're talking economic development, this is really important because, for the very first time, millennials are the largest demographic group alive and the largest group in the workplace ... And this is why it's important, I think, that we have somebody who is of that world but understands all the other worlds."

Like most candidates seeking public office in Vermont this year, Ram devoted much of her announcement speech to the notion of affordability.

"The bottom line is we cannot continue to ask Vermonters to pay a Vermont premium on their cost of living while they take a Vermont discount on their wages," she said.

To address the problem, Ram said she would fight to make early childhood education, college, homeownership and internet access more affordable. If elected, she pledged, she would be "the people's advocate in Montpelier."