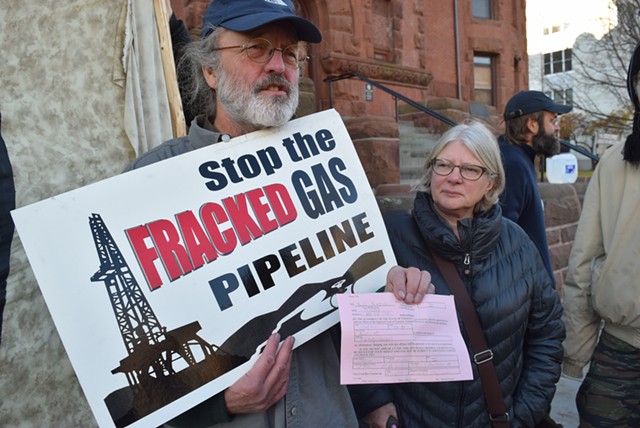 Johann Kulsic of Burlington had never been arrested before. But he was charged Monday morning after the natural gas pipeline protester chained himself to the door of a Montpelier building that houses the state Department of Public Service and the Public Service Board.

“If they won’t listen to us, they need to see we won’t back down,” Kulsic said after returning from a trip to the Montpelier police station with a citation for disorderly conduct. 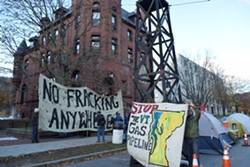 Kulsic was arrested along with two others, Crystal Zevon of West Barnet and Dave Przepioski of Craftsbury Common, shortly before 8 a.m. as they blocked employees from entering the front and back doors of the State Street building. The protest was the latest in opponents’ efforts to derail Vermont Gas Systems’ project to extend natural gas service from Colchester to Middlebury, and followed a weekend of activism in Montpelier.

Zevon, a longtime activist who said she’s been arrested in New York State, described this cuffing as remarkably polite. “They couldn’t have been more gentle,” she said. She said she considered getting arrested necessary. “If we don’t start doing drastic things, people don’t pay attention.”

Jon Copans, deputy commissioner of the Department of Public Service, said the protesters prevented some employees, including him, from getting into the building for a short time Monday morning. Others who had already arrived at work felt uneasy having protesters block the outside doors, not knowing what else might happen, he said.

“It’s unfair that they’ve chosen to target the staff here,” Copans said. “I would hope all sides are able to continue Vermont’s tradition, which is one of civil dialogue.”

About 9 a.m., the three arrestees walked triumphantly back to meet fellow protesters who continued to line the street holding signs.

Protesters had spent the weekend blocking a section of State Street in front of the Statehouse, setting up a mock oil derrick in the street. Avery Pittman of Burlington, a member of the organizing group Rising Tide Vermont, said about 20 protesters camped out along the street overnight. By Monday morning, in an agreement with city police, protesters moved to allow narrowed two-way traffic.

“We want this pipeline to stop,” Pittman said, calling the department’s agreement a "back-room deal” that flies in the face of the wishes of hundreds of Vermonters.

Protesters largely directed their ire at an agreement the Public Service Department reached this month with Vermont Gas under which the Shumlin administration would endorse the project if Vermont Gas limits the cost Vermont customers will pay for the project to $134 million — $20 million less than the company’s last cost estimate.

The project was originally slated to cost $86 million and the Public Service Board is reconsidering its permit because of the cost hike.

Protesters argue that building the pipeline, which will bring from Canada natural gas that’s been extracted by hydraulic fracturing, is hypocritical in a state that has banned fracking. They also contend that increased reliance on natural gas will slow movement away from fossil fuels.

Jane Palmer, whose Monkton home sits along the pipeline project route, joined protesters Monday morning on the sidewalk along State Street. Frustrated by a lack of progress in legal proceedings, Palmer said, she especially appreciates the protests organized by Rising Ride.

Vermont Gas, which defends the project as a means to bring a cleaner, less expensive energy source to residents and businesses, announced last week that it had initiated eminent domain proceedings with nine property owners who have declined right-of-way agreements. The company reached agreement with 95 percent of landowners, it said in a news release.

The Palmers have not reached a right-of-way agreement but have not heard from Vermont Gas about an eminent domain proceeding, Jane Palmer said.

Meanwhile, Maren Vasatka, another Monkton landowner on the pipeline route, said Vermont Gas has purchased her home for $560,000, which, she said, she agreed to because “It was the only choice we had.”

Vasatka, whose home was appraised at $415,000 several years ago before the gas project was proposed, said she and her husband had asked for a $62,500 easement but were never able to reach agreement with Vermont Gas on the terms. Buying her home will end up costing Vermont Gas much more, she said, which raises more questions about how much the company is spending on the project.

The sale agreement allows the couple to remain in the home rent-free for two years, Vasatka said. She said she doesn’t know when or where they will move, but it won’t be into a utility corridor. “We never wanted to sell our house, but we didn’t want to live on a pipeline either,” she said.