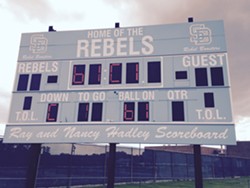 The "Rebels" will keep riding in South Burlington.

The school board announced Wednesday night it will keep the nickname, saying the word can have positive meanings. Members said that the district cut any connection to symbols of the Confederacy two decades ago when it stopped flying confederate flags at sporting events and retired a Captain Dixie mascot.

All five members agreed. They directed the superintendent to discuss with administrators the idea of a steering committee to continue the dialogue of "reinforcing an inclusive school community," according to board chair Elizabeth Fitzgerald. "As always, we respect differing opinions," she said via email to Seven Days.

Critics said there is no way to sanitize the word and vowed to keep lobbying to retire the rebels, a Burlington Free Press video of the meeting shows.

The word is deeply tainted and the school board should know better than to try and overlook that, they said. "Shame on you," Mary Brown-Guillory, president of the Champlain Area NAACP, told the board. The connotation of "rebel" is "nothing but hate, that's all it is," she said.

Others said the word has much broader meaning than its association with the Confederate South and that it would be unfair to take away a nickname that has its own local tradition. They saw the attack as politically correct and off-base.

Odd as it may seem, the suburban high school deep in Yankee country adopted the name the 1960s and displayed various symbols of the Confederacy until people complained these were racist about 20 years ago. At that time, in a compromise, the school district dropped the flags and stopped playing "Dixie" at football games — but kept the name.

The controversy flared again last summer after South Carolina voted to remove the Confederate flag from the grounds of the state capitol following a racially motivated shooting at a black church.